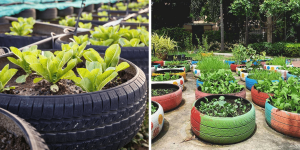 This post is inspired by our Guru community in a discussion among gardeners on whether or not its a good idea to grow vegetable gardens in tires.

At first glance, it seems like an excellent solution to a worldwide waste problem. Often tires are left in gigantic piles that sometimes spontaneously combust. This causes huge, extremely toxic fires that are definitely bad for human health. So the idea of growing edible gardens in them might justly cause you to raise an eyebrow.

This is a topic hotly debated but supported currently by no science.

Surprisingly, there have been no studies testing for toxic substances in vegetables grown in tires. There have been some studies in regard to the ground tire mulch they add to playgrounds and even the results from those are more or less inconclusive and beg more research. So the question is sadly left up for speculation for now at least.

On one side of the debate, things seem pretty rational.

Yes, tires contain some toxic chemicals but the majority of the off-gassing happens in the first year of the tires life, which is generally spent on the road. To be clear the tires people use are old tires that have been sitting around their property or ones donated from a tire shop with more tires than they know what to do with. I personally started a farm with tires and hay bales in Cleveland with donated tires. The guy who donated would otherwise have had to pay to dispose of them.

In my research, I read one account from someone growing potatoes in tires who found they tasted like tires when harvested.

I have only done potatoes in sheet mulch, never tire towers so I can’t weigh in on this personally. It would seem to make sense that if ANY vegetable is gonna be effected it would be root veggies. I’ve grown pretty much every veggie but root veggies in tires and had great results. No taste difference whatsoever between those plants and the ones in the hay bales.

However, as we know often times toxins are tasteless so just because we don’t taste them doesn’t mean they aren’t there.

Many argue that recycling tires for other uses keep them from being burned which is arguably better than releasing those toxic fumes into the air. 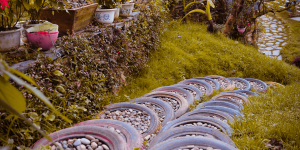 I’ve been close to burning tires, and it is straight-up toxic, there’s no debating that. But is the risk of growing veggies in old already off-gassed tires really that high? Some feel it’s not worth taking the risk.

The most worrisome compounds in tires are heterocyclic aromatic amines and polycyclic hydrocarbons, neither of which are water-soluble. Theoretically, this means not much leaching is happening there. Beyond that, the leaching of metal salts into the soil might be a bigger concern because salts are indeed water-soluble. There are some studies that suggest that those salts kill biological life in the soil, specifically algae and bacteria which is harmful to the environment.

The thing is tires take literally decades to break down to those toxic building blocks.

Much longer than the one year time it takes to off-gas the worst chemicals. Many people suggest they’re fine but will recommend you don’t use the same tires for years and years. The question then arises, what to do with the tires after they’re no longer “good” for gardening? It’s worth noting here that none of this matters for ornamental gardens….other than the salt leaching issue that is a concern. But the question there is really how much does it leach? Enough to matter or is it slow enough overtime to never cause significant issues? 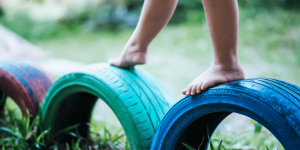 This is just one of many ways to recycle tires.

When I was a kid there was a rise in the playgrounds with tire mulch. Now some studies suggest that kids playing there during hot days are at risk of cancer and other illnesses. This is because off-gassing is the highest when its hottest.  Another growing use of old tires is the Earthship house design. Even the creator of Earthships has faced opposition for using tires. Despite the fact that in an Earthship, those tires are buried under layers of dirt, clay, and cement. There are entire business sectors dedicated to the reuse of these tires.

So, are those tires toxic for use in gardens?

No one knows for sure and there are compelling arguments on both sides. Probably not as toxic as using old railroad ties like some do, coated in toxic creosote. Yet if you’ve got okay soil or other gardening options, maybe try those. Perhaps use fruit crates or milk crates instead, for a slightly portable recycled option. 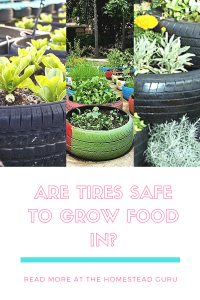 More from the Homestead Guru: Permaculture Puts Organic Gardening on Autopilot(Opens in a new browser tab)

Are Vegetables Grown in Tire Gardens Safe to Eat

That’s a hysterical title! Love it!