In a fairly unprecedented move, the Texas Medical Board (TMB) ruled Friday in favor of controversial cancer doctor Stanislaw Burzynski by adopting nearly all Burzynski’s lawyers recommended sanctions and shunning nearly every harsher recommendation from TMB lawyers. The hearing room in Austin hit fire code and spectators listened from an open door in the hallway as the doctor who has been trying to deliver his cancer cure to the masses since the 1970s, received good news. 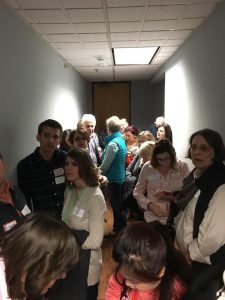 Burzynski, whose been curing supposedly “incurable cancers”, will be allowed to continue practicing medicine and tending to his more than 150 current patients at his Houston clinic. Burzynski’s patented antineoplaston therapy has produced several successful Phase II FDA Clinical Trials and been given permission for Phase III Trials – the final step before drug approval.

Friday was the penalty phase in a two-year legal battle in which the TMB accused Burzynski of over 100 charges ranging from billing issues to failing to disclose to patients he owned the pharmacy where he was writing prescriptions from. Much to the embarrassment of TMB staff, more than 100 charges were dismissed (seven stuck) and Austin judges called Burzynski a “significant value” to the cancer community. Despite the overwhelming loss by board staff, it was proposing a $380,000 fine, a strict form of probation. Instead, judges reduced the fines to $60,000 and placed Burzynski on a form of probation that protects his due process if there are future allegations.

Burzynski’s lawyers argued patients who saw Burzynski went in with “eyes wide open” after rejecting conventional medicine either for philosophical reasons or because it had failed them and that the overwhelming majority of Burzynski’s patients were terminally ill and had no other place to turn. At the conclusion of the meeting, 25 Burzynski supporters were afforded three minutes each to testify to the board in support of their doctor. Filmmaker Eric Merola, who put Dr. Burzynski on the public’s radar with his documentary film “Burzynski,” used his three minutes to spell out Burzynski’s history versus government.

Brenda and Patrick Powers from the Dallas area, displayed an MRI to the board and testified that Patrick was cured by Dr. Burzynski 13 years ago and his cancer returned in October. After a couple months of treatment the brain tumor was no longer visible on the MRI scan. They said Patrick needed eight more months of treatment and feared if TMB yanked Burzynski’s license, Powers likely wouldn’t survive. Several other current and former patients and their family members flew from around the country to plead to the Board, which along with the FDA, has investigated Burzynski numerous times over the last 40 years while impeding his cancer cure.

In the morning, protesters held signs which features enlarged MRI scans, and cured patients smiling with a headline that read, “TMB, can you see their smiles?” and “Cancer Cure” and “Shame on TMB.” The protests followed a wave of demonstrations in Austin during the controversial State Office Administration Hearing (SOAH). 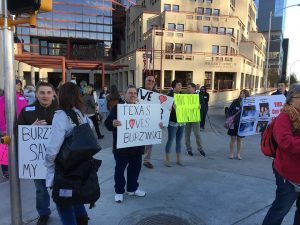 Immediately after the hearing, Burzynski’s legal staff gave the doctor an aggressive handshake after pumping their fist and explained to media that it was a “win with an exclamation point.”