Something I miss very much on my mountain here in Acapulco is the presence of a winter. Many consider coming from a cold temperate climate to be rough, but in all honesty after living in the subtropics for a over year I’ve come to the conclusion that a climate with a winter is much gentler.

It’s a reset, it kills much of the plants, bugs, and pests that can make a garden haggard in a hurry. In the tropics you have no reset, so everything just goes nuts trying to eat everything.

If you don’t believe me, move to the jungle.

When I started gardening I did a lot of research and many books for beginners will tell you that there are certain seeds that just have a hard time starting. And they can be difficult for many reasons. One of them being the need for a winter. Another reason is a thick seed coat to protect from pests. Seeds have many mechanisms to signal to them genetically that it’s time to germinate.

Like pine cones, those need to be burned before they can sprout, or at least exposed to a large fire. This is because fire is a part of their life cycle in the form of forest fires.

Certain plants do well in certain areas naturally, based off of climate. Plants like lavender or carrots are originated in cold climates, meaning they’ve adjusted to having that yearly freeze.

Botanists have found through observation that these temperate plants need that cold just as much as the rest of the ecosystem, as it’s almost like a genetic switch for them. They need to be frozen for a certain amount of time before they’ll be signaled with the okay to germinate.

Until that happens, these seeds are not technically viable. Starting them yields mixed results at best and I know because I’ve tried. 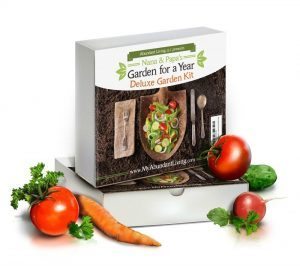 Get a Deluxe Gardening Gift Set on Amazon!

It makes sense as a defensive mechanism, as a freeze will kill a young seedling. A freeze triggers the seed, signaling that the freeze has already passed and it is now the beginning of a new season, pretty cool right?

So what to do without a yearly freeze?

Gardeners have been cheating this one as long as freezers and things of that nature have existed.

By using a process called cold stratification, we can trick the seeds into thinking it’s time to germinate.

The good thing for them is it will be, regardless of if it’s actually the correct season or not. Because we’re taking the time to start them this way, it’d make sense to continue to give them the care they need to survive and thrive.

This has many advantages like extending a growing season in cold places to simulating a winter when growing dainty northern crops down south without a yearly freeze.

Anyone that follows me, knows I live on top of a mountain in Acapulco, and I’ve got a lot of seeds smuggled from the United States, many of which require this care.

Recently I started a round to show you how this process works. There was personal incentive as we’re working on jump starting the garden, both up here on the mountain and down in the bay as well.

At this point they’ve been removed from the freezer and are in the process of sprouting, with the apples seemingly happening first.

For the menu I’ve got:

It all starts with a couple of paper towels, clean water and a small amount of potting soil. The soil is used as a buffer, as this needs to be put in the freezer. The dirt simulates being suspended in soil, which actually protects frozen seeds in the winter.

Just add an even layer of dirt and moisten. Sprinkle the seeds on top.
Those little red specs are the beginnings of strawberries.

Plantain is an underestimated herb that is considered an herb where I’m from, the north eastern United States. It’s simple in appearance with a very un-showy flower but it’s got medicinal benefits that shine for it. I’ve used it in salves for years, and currently possess two different salves with the leaves infused within.

I have a special soft spot for this one, as there were plantain seedlings sprouting in the outdoor area in the jail I was in for three weeks, before going on the run.

Plantain is the only plant I interacted with in those three weeks, and interact with it I did. It was growing out of a crack in the wall in a concrete room with an open ceiling. I loved it’s no cares attitude and often went outside just for it.

So it’s important I get these seeds started, that I harvested by hand in Detroit before moving to Oregon on the run. They need the cold love too, so into the container they go.

I just stacked them in an order I can remember and put them into Tupperware. What you put them in does not matter, so long as it seals fairly well.

I put this in my freezer for a week, then I’ll just remove them and let them come to room temperature in the same container. I’ve gotten apple sprouts so far(shown above), which is not what I expected to get first, honestly. Life has a habit of proving me wrong.

If you’ve ever been given seeds while being told “I can’t get them to germinate”, maybe consider if they might not need some special seed care to wake them up! I’ve found this is the case in almost every case.

Except passion fruit, that plant’s weird. Those seeds take a year to germinate, just because.

Thanks for ten advice. I live in Puerto Rico and getting some seeds to sprout is a challenge.

Thanks for the reply! Some seeds require different treatment, everything from being digested to scoring the seed shell. Pine cones need to be exposed to fire and smoke to sprout. Interesting stuff!

WOW! THIS IS HOW FOREST REGENERATE!

I noticed that a HUGE pinecone that I picked up in the Appalachian mountains in 2008 is still alive! It closes up when it rains and is cold outside and opens up when its sunny and hot. Its almost 10 years old!!!!!!!!!!! Our dog recently got to it, and despite some of the pieces being tattered, it still lives!!!