Circumcision in Denmark and Europe

When you give birth to baby boys in the United States, as a new mom, you face the dilemma of whether or not to circumcise. If you ask most doctors in the US, it’s medically necessary. They’ll push you to cut your new healthy baby boy. In fact, 80% of all males in the United States are circumcised. Alternatively, in most European countries, fewer than 20% of their populations on average having been cut.

Recently, there’s been an awakening of a sort. A movement of people who are beginning to advocate that the risks of circumcision are not worth the supposed benefits, is on the rise. According to the World Health Organization, it’s effective at reducing HIV transmission rates as well as other infections. However, many feel that these claims are false. They also say that the possible complications of circumcision much outweigh any possible benefits of the procedure.

The Real Problem with Circumcision

Female genital mutilation is largely considered immoral. Yet, male mutilation remains the norm in the US. However, many activists believe male mutilation of genitalia is just as immoral as female genital mutilation and is a much more widespread problem. Studies have shown that it’s extremely risky as far as possible infections are concerned. It can also reduce sexual pleasure later in life. Many men report a decrease in sexual ability in cases where the procedure was performed incorrectly. Yet it’s the norm in the United States.

Places like Denmark have the majority of people wondering why any parents would want to mutilate their baby boys. In a poll taken in 2016, 87 percent of Danes prefer a ban on circumcision for non-therapeutic, or elective reasons. Even The Danish Medical Association has spoken out Against Circumcision. The Danes haven’t banned male mutilation yet. But there is widespread support for the ban and Danish politicians seem willing to listen. However certain religious cultures still view the practice as part of their religious traditions and are pushing back against a possible ban.

In fact, many countries consider the circumcision of healthy boys to be “ethically problematic”. Yet in the United States amputation of foreskins is the single most common surgery. Many people in the US, when challenged on circumcision, believe leaving the foreskin intact is dangerous.  Often saying it’s prone to infection and just plain ugly while ignoring the fact that the penis is the result of a highly effective evolutionary process.

I live in Mexico where the majority of men, my partner included, are uncircumcised. You would think the country would be rampant with infections, and men rushing to get themselves cut as adults, but that just doesn’t happen. The same is true of most European countries. If remaining intact is such a health risk, where is the data to support this conclusion that justifies the pain and suffering visited upon baby boys in the US?

The Future of Circumcision in the US

As far as the US is concerned, I think we should encourage a shift in opinion. Unfortunately, the procedure is millions of dollars a year cash cow for hospitals. Doctors frequently push new moms into circumcision using fear-based manipulation tactics. However, if parents properly educate themselves and realize the true nature of what they’re doing, they will empower themselves to make better decisions for their baby boys. And we could then stop the senseless suffering caused to both parent and child. After all, a baby with an intact penis is likely to be way calmer than a baby who has undergone an elective surgery and is forced into a healing process.

I think the education efforts of the Intactivists—people rallying against circumcision—should continue to inform those willing to listen. I know when I have a son one day, I will leave the decision to him on which of his body parts he’d like to keep or remove. 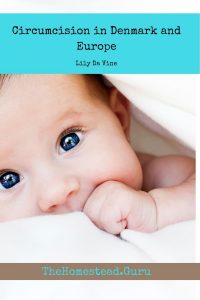 Check out this guide to alternative uses for breastmilk at Homestead Guru.