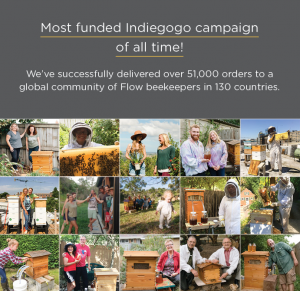 The Flow Hive team is celebrating another successful run on crowdfunding platform Indiegogo, with sales for the Flow Hive 2 exceeding USD$1million (AU$1.2M) this morning.

The Flow Hive 2 is the culmination of a year of product development and reflects feedback from Flow’s worldwide community.

With a total of 14 new innovations, Flow Hive 2 is the most beautiful and user-friendly beehive ever built.

As at 5.05AM, 16 March AEDT, 1,329 units with a value of US $1million had been sold in the United States of America and Australia, the biggest markets for Flow Hive since it launched in 2015.

The 2015 campaign brought in nearly US $12.3 million, making it the most successful crowdfunding campaign ever launched outside the USA.

The Flow Hive 2 is the first Flow Hive woodware to be made entirely in-house at a new facility in the Northern Rivers region of NSW, Australia, home to inventors, Cedar and Stuart Anderson.

With Cedar, the younger of the father-son inventing duo behind the revolutionary invention, now able to keep an eye on every aspect of the production process, the quality is now practically flawless.

“We were extremely proud of the quality of the woodware we’ve been producing for the past three years, but this is even better. With all its new features, the Flow Hive 2 is absolutely perfect for beginner beekeepers,” Cedar said.

New beekeepers account for approximately half of the 51,000 Flow Hives sold since February 2015 and Flow Hive has been redesigned literally from the ground up with them in mind.

Throughout the Indiegogo campaign, Flow Hive 2 will be available at a special price with bonus features, including a honey harvest shelf and adjustable legs, for US and Australian customers only. Later this year it will be available for purchase worldwide on Flow Hive’s website.

For a full description of the new features, or to order, visit https://www.indiegogo.com/projects/flow-hive-2-innovation