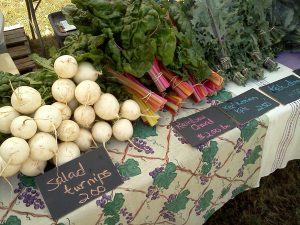 Last week, Maine’s Governor Paul LePage signed a first-of-its-kind bill that could set a refreshing new precedent for other states to follow.

The Act to Recognize Local Control Regarding Food Systems (LD 725) gives local towns and communities the authority to create their own ordinances regarding the distribution of locally-grown food.

This means that local farmers and gardeners in Maine will no longer be subject to the cumbersome red tape of state regulations on food safety.

Supporters of local food freedom are calling this a win for small farmers, who just want to sell the food they produce to their local communities without too much interference.

State regulations are intended to oversee massive commercial farm operations, and complying with them can be financially overwhelming and complex for homesteads or hobby farms.

“This is a great day for rural economic development and the environmental and social wealth of rural communities,” said Democratic Representative Craig Hickman, of Maine. “Food sovereignty means the improved health and well-being of the people of Maine by reducing hunger and increasing food self-sufficiency through improved access to wholesome, nutritious and locally produced foods.”

Now that the state has granted municipalities the freedom to self-regulate when it comes to local foods, many of them are enthusiastically enacting ordinances that pave the way for small farmers to sell what they produce without fear of harassment or interference from the state.

As many small farmers know all too well, they might be able to sell home-grown cucumbers, but not pickles (unless they can provide proof of having made them in a commerically-inspected kitchen). They may be able to sell yard eggs, but regulations on sanitary slaughtering practices mean that selling meat birds is out of the question–at least until they’re able to cough up the funds to build a commercial-scale facility.

However, Jesse Watson, a permaculture designer in Maine and local food activist who heled draft some of the local legislation on food freedom, explains that the movement for food sovereingty isn’t about being against state food safety laws.

Instead, food sovereignty recognizes that one-size-fits-all regulation keeps the little guys at a huge disadvantage compared to commercial-scale farmers.

Blanket regulations on food production also keep the bar needlessly high for young people who might be interested in farming but don’t have enough savings (or a small loan of a million dollars) to purchase commercial-scale land and equipment.

We’re at an age where farming as an occupation is on a worrisome national decline, and the average age of farmers in America is 65–in other words, folks who ought to be retiring soon!

Joel Salatin is one voice in the farming world who’s come up against regulations like these so often, he’s been inspired to write a book about it.

Entitled Everything I Want to Do is Illegal: War Stories from the Local Food Front, Salatin’s book details his many problems with state regulations which are intended for huge-scale operations.

His small, efficiently-run farm uses a time-honored, integrative method called silvopasture–which more modern farmers would do well to learn about!

While Salatin’s facilities are impeccably maintained for safety and cleanliness, they are simply too small to sensibly comply with most commercial food regulations.

Never mind that the regulations were written about industrial-scale farms who slaughter five hundred thousand birds at a time, while he’s working with perhaps 50.

Salatin is a visionary farmer, and his books and videos are fascinating. He’s one person who’s surely hoping that more food sovereignty laws are passed, giving power back to communities and individuals.

As Betsy Garrold, the executive director of Food for Maine’s Future says, “If we can feed ourselves, no one can push us around.”