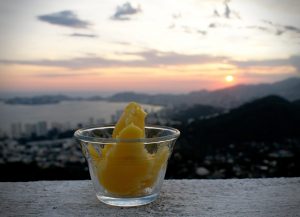 Ghee is one of those things I’ve heard about for years but never bothered with myself, which is a big mistake. Turns out it’s all the good stuff of butter and none of the bad stuff making it better for the dairy intolerant. It’s honestly a culinary delight as far as I’m concerned and I’m not sure I could go back to consuming butter with the milk solids in it and have noticed my skin starting to clear even more switching to ghee which was the goal. It also makes it a more versatile cooking oil since you remove the solids that generally burn and make food taste funny.

More from the Guru: Drink Your Fungus! Continuous-Brew Chaga (Mushroom) Tea and Coffee

It all starts with butter, in a pan, as much as you want to make. I used nearly a kilo the first time and have since turned the rest of it, nearly another half a kilo into ghee since first writing this recipe and posting it on Steemit.

All you need to do is heat it on low until it’s all melted and turn off the heat. Within five minutes a weird film will show up and the solids will sink. Use a spoon to skim off the film and dispose of that. I give it to my dogs or chickens depending on who is better behaved.

When you pour you need to be careful not to disturb the layers and if you do set it down for a few minutes again to settle. I just used a simple plastic fine mesh strainer and poured slowly, dumping out any solids that collect in the strainer here and there. I found that some solids still made it through but they settled and especially once cooled in the fridge formed separate layers. There’s a creamy layer in the bottom of the container I plan to just feed to the dogs or my birds.

Supposedly properly strained this can be stored at room temperature but I keep mine in a plastic container in the fridge until I need it because I’m not yet very good at getting out all those cream solids the first time around.

This can be used for everything from butter dipping sauces as it’s the same thing as clarified butter to breakfast. In terms of cooking with butter unless you’re doing it on low this is the best way to go about it from a health standpoint because burnt butter milk solid particles just aren’t good for you.

So there you have it, simple but full of uses and honestly it makes butter nearly as versatile as my beloved avocado oil. My biggest regret is not trying this years ago! Delicious on top of a fresh steak or in literally anything especially from a carnivore standpoint.

1) Heat butter in pan on low until melted.

3)Skim off film on top with a spoon.

4) Carefully strain the golden middle layer into a container leaving the white solids in the bottom.

5) Refrigerate and use in everything. If you can manage to not get any solids into your container you can store at room temperature, but considering we’ve got ants that eat everything here I just don’t risk it.

More from the Guru: Jelly from Flowers? Edible Flower Recipes for Lilac Jelly