I AM READY for cannabis decriminalization. We first posted about this a year ago when the House Judiciary Committee voted on bill S.2227. It passed in a 24-10 victory last November. I’d all but forgotten about this in the fog of 2020. But it seems like the disaster that is 2020 might be throwing us a bone by freeing the weed!

It’s called the Marijuana Opportunity Reinvestment and Expungement Act of 2019, shortened to “MORE 2019”. The bill will deschedule Cannabis as a controlled substance on the federal level. This is nationwide decriminalization with a side of expungement. So federal cannabis cases will be dismissed and erased as a result of this bill. States will be encouraged to do the same.

This could be the beginning of a nationwide trend to release cannabis offenders and expunge their records. It may be that innocent people will no longer have their lives ruined over engaging in peaceful behavior.

From a drug policy activist’s perspective, decriminalization is what you want. Simply put, it would no longer be a federal crime to use, possess, or even produce cannabis products. I’m not interested in seeing the regulation of cannabis that would come with legalization.

Put simply, this will be the single greatest achievement of the drug policy movement as far as I’m concerned if this bill passes into law.

Where are we in the process?

The House Judiciary Committee proposed the bill last year. It may soon be put to a vote in the House of Representatives where it’s expected to pass. There are more than 50 lawmakers co-sponsoring the MORE 2019 bill. With two-thirds of Americans supporting cannabis legalization, it seems like a sure thing.

What’s next for decriminalization?

If S. 2227 passes in the House, it’ll go to the Senate for a vote. VP-nominee Kamala Harris, along with Presidential candidate Joe Biden is co-sponsoring it. It remains unclear whether or not the majority leader of the Senate will bring the bill to the floor for a vote.

There are lots of theories swirling around right now as to why there is growing momentum towards decriminalization. My theory is that people in the US have had a HARD time in 2020. It’d make sense to pass something like this to quell all the protests. Basically give the people back their weed so they shut up. Some sources say there’s “greater urgency” because of the recent BLM protests which somewhat supports my theory. Whatever the reason, I’ll take it!

Why does decriminalization matter so much?

Many who follow my personal story outside of the Homestead Guru know how severely these awful cannabis laws have affected my life.  Cannabis decriminalization will change everything for me. My entire life, beginning from childhood, is one that has been intertwined with the war against marijuana. It’s affected my upbringing, my family, and is now the reason I cannot return to my home country.

It resulted in me witnessing the murder of my loved one. And none of it would have happened without the prohibition of marijuana.

We can’t go back and change the past. But what we can do is make sure that in the future, no child or adult has to endure the suffering that I did. And maybe, just maybe, decriminalization means that I’ll be welcome in my home country once again. 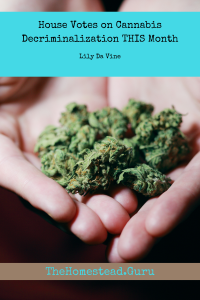