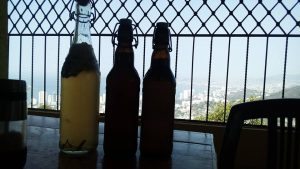 Things are still brewing up here on the mountain and I’m pretty excited about that. As I look more into kombucha, I’m more intrigued as there’s way more to it than I expected. I’ve found some sources that have allowed me to wrap my head around what’s going on in that jar better, which has increased my confidence with this stuff. After your plain kombucha is done, it’s time for the kombucha recipe and to flavor it and ferment it again, for more fizz. This realistically is the fun part, as you can realistically drink kombucha now if you’d like, and I did!

I found this chart online and have found it extremely useful for coming up with flavor ideas, although that isn’t something I’d say is that hard. Just consider the things that you like already, like cinnamon, apple or strawberry and try those first! As a cannabis lover, I’ve of course had the question “What happens if you put weed in it?” I hope to answer this one soon 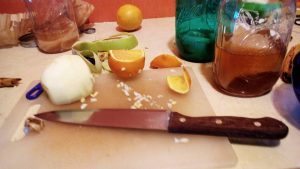 The process is simple, starting with sterilizing the containers for the second ferment. The bottles featured in this article are extremely popular for producing the best second ferment within the kombucha brewing community. There are drinks here available for sale in them, so we get the drink and the bottle! Our Englishman loves fancy Chezch beer, which happens to come in these awesome flip top bottles. 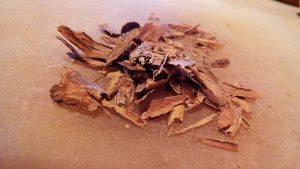 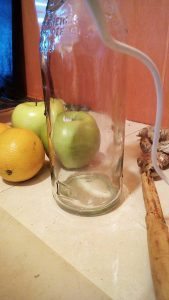 The simplest sterilization method for this is just washing with hot water. Some people use vinegar and let them dry but that’s not really necessary if a good job of washing is done. 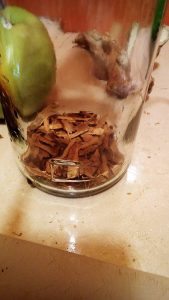 I just broke up some cinnamon sticks and put the pieces in, about 2 T for the large bottle that probably held like 32 ounces. 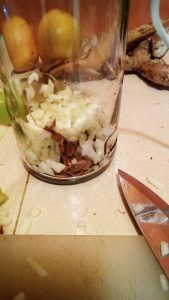 Add the fruit or juice, in this case apple. I used equal amount of apple to cinnamon, or I tried to anyway. You’ve got to be careful on the ratios for how much of this stuff you add in terms of flavor and sugars. If you add too much sugars, the yeast will go crazy and your kombucha will be too foamy.

After that, using a funnel, pour the fresh kombucha in the bottle. Seal it up and put it in your brewing spot and let it be for 12-36 hours depending on your climate, before you burp. 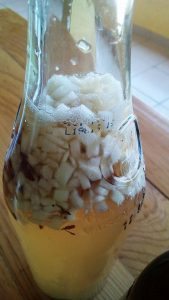 My first flavor experiments consisted of: apple cinnamon, apple ginger orange cinnamon, orange ginger. I thought the apple cinnamon was so good I made it again, although I’ll admit the ginger drinks intimidated me a bit to say the least. They were very ginger rich and pretty beer like in flavor, which made them a bit tough for me to handle. Still good despite that though, and they got better over time. 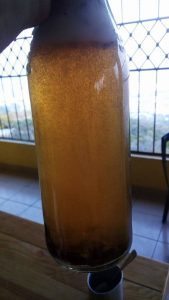 It’s important to burp your bottles during the second ferment, although how often depends on climate. Where I am, I should do it more than once a day to avoid geysers of kombucha, and that’s not a joke. My first bottles geyser-ed because I read some people wait 2 days before burping to build up fizz. The driveway ended up covered in Kombucha, which the puppies loved. In extreme situations, the vessel can explode but that’s not common. 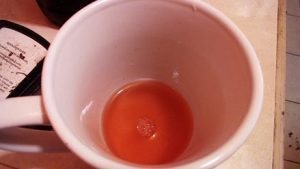 After a few days, it’ll be sufficiently fizzy and ready to refrigerate. If you peek inside, you’ll notice it might look like your fruit is stuck together. A scoby will form during this, which is totally normal. When I drink my ‘booch (a nickname for kombucha), I use a small plastic strainer to strain out the fruit, little scoby and spices. I just drink a bit at a time but I really am intrigued by this drink even though it’s a bit weird.

As far as my health is concerned, I am noticing differences. My stomach, which has been unhappy as of late is a lot less upset on the regular. I find myself needing to dab due to upset stomach less, which is allowing me to conserve my dabs for headaches and pain. I noticed I’m a bit less odoriferous in pretty much all regards, which implies my bodies pH is resetting.

While I can’t say I’m sold on ‘booch, I can say I’m very interested. The more I look into it the more I find that there is actually solid potential for it to help. While the research on kombucha itself is small, there’s a lot of research on the things it contains, like glucaric acid. From what I can tell, research like this is where much of the health claims from kombucha seem to be coming from.

So stay tuned, as I share more on kombucha like; how to start a hotel, how to continuous brew and what sort of science backs up claims!
Thanks for reading, happy brewing!

Click here to check out the 5th part of the 8 part series! By part 8, you will have the knowledge you need to start your own Kombucha brewing project!