Since I was a little girl monarch butterflies have been a symbol of beauty as well as a symbol of growth, as they grow from caterpillars to the beautiful winged creatures they are.

I remember hearing as a kid that they were endangered but they seem to be rebounding in huge numbers.

I didn’t know until recently that they land in Mexico every year in the heart of the state of Michoacan, Mexico.

I’ve been to the part of the state before where they land and I couldn’t help but think “I totally get why they come here”. If you’re a butterfly looking for somewhere nice to stay, Mexico is a no-brainer.

More From the Homestead Guru: Self Sufficient Backyard Gardens are the Way of Life in Northern Italy!(Opens in a new browser tab)

This is a yearly cycle that starts in Canada and the Northern United States.

They grow up eating tons of milkweed, which I remember was considered protected in Ohio to try and save the Monarchs as a kid. When the days get longer they’re signaled to travel south, to make a 3000 mile trip in total over a few months. Where they travel depends on where they originate, if they’re west of the Rocky Mountains they head to California. Everything east of the rockies (which is a huge area) heads south to Michoacan to spend the winter months in the mountains.

They choose a highland area known for the sacred oyamel fir tree.

These forests provide a blanket effect keeping the insects warm. Something to note is that there really isn’t a winter in Mexico the same way it is in the United States so the combination of the warmer weather and protection from trees is the key for why they come, it’s not just the beautiful area.

In 1997 populations were estimated at about 687 million butterflies. By 2014 this had decreased by 80 percent or more to only 25 million. Monarchs were considered an endagered species for awhile because of this phenomenon, probably partially due to the fact that everyone was cutting down their milkweed in search for the perfect “weedless” front lawn. I remember in 2016 in Detroit we were all purposely not cutting the milkweed, in an attempt to help this effort. 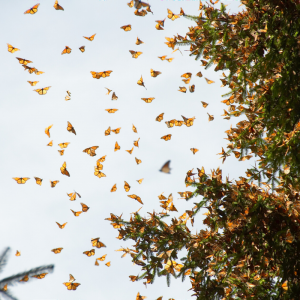 By 2016 the populations had risen to about 150 million and this year satellite images as well as sightings from those in the path of these butterflies lead researchers to believe this year the monarch migration will be way bigger than expected.

The most recent sighting recorded is in Angangeo, Michoacan which isn’t far from their landing point. It’s expected they will make their arrival in their final resting spot in just a few weeks from now. If everything goes right, I’ll travel to see this marvel in person.

For someone who has experienced the most difficult year of her life this year, the influx of the Monarchs has been an incredibly motivating and exciting thing to follow and hear about.

Have you seen the monarchs on their way? If so, comment below and tell us where you spotted them!