Can you believe that children in Great Britain watch more than 17 hours of television per week? When you break that down, it averages over 2 hours a day, every single day of the year, which comprises a minimum of 15% of their waking lives (assuming 8 hours of sleep per night).

The reality is that many adults watch this much, or even more television, as well. How often have you been at a family event where the television is turned on in the kitchen or living room the entire event? How many times have you had the news on during breakfast, or a movie during dinner? Television sneaks its way into every crevice of our lives if we are not careful!

More from the Guru: New Study: Women Live Longer When They Live in Nature

OK so television takes up a lot of our time and energy…. but screens and technology comprise more than just televisions….  Lets take social media consumption into the picture — Great Britian’s children spend over 20 hours per week on the internet, mostly using social media.

Now we children are at nearly 40 hours per week watching television and using social media. That is enough time to work a full time job. By the age range of 11-15 British children spend over 50% of their waking lives in front of a screen, averaging 7.5 hours per day.

‘For a new generation, nature is more abstraction than reality.
Increasingly, nature is something to watch, to consume,
to wear – to ignore.’
Richard Louv, Last Child in the Woods.

If our children are spending this much time in front of screens.. what are they NOT doing that they used to do? Playing outside is the first one that comes to mind for me. Running, climbing, building, throwing, chasing, hiding…. These games helped us in so many ways… We received sunlight and fresh air, we got exercise, we learned how to communicate and problem solve.

More From the Guru: New Research: If You Work in an Office Your Trash Collector is Likely Happier Than You

Now, our children are hunched over, staring at a screen instead of running and laughing and moving their bodies. This obsessive screen time has resulted in staggering health ramifications. Vitamin D deficiency, nearsightedness (I have this problem, and I think its from looking at screen so much in my adult life!), and a decline in ability to engage in physical activities like push-ups or sit-ups. This has also resulted in an increase in problems with cardio-respiratory systems (heart and lung).

Researchers believe these issues are directly connected with a reduction in time spent outside.

This time spent outside has a huge impact on us – in fact, it can expand our expected lifespan. In  2009 a study conducted by researches at the University of Essex concluded that children who were allowed to “free-range” and spend time in nature actually lived longer.

More From the Guru: Backyard Gardens are the Way of Life in Northern Italy

I read that and think “DUH!”, of course people who have active childhoods are more likely to live longer. They are learning the life skills required for longevity – movement, relationships, fresh air, lots of hydration, sunshine, and the emotional catharsis of laughter!

Children who are not allowed to move like this will have no context for movement like that as an adult. They will likely lead a lifestyle that is more sedentary because that is how they were raised. The lifestyle skills we are taught as children are often carried into adulthood. So even if you are too tired to get out and move with your kids, its important you make an effort to do so!

More from the Guru: New Research: More Time In Nature Improves Your Eyesight

Additionally, according to the 2009 study, children who had a greater exposure to nature had reduced symptoms of ADHD by THREEFOLD. Is there a chance that ADHD isn’t a disorder after all, but a natural human response to a lack of exposure to nature? Think about it, how do you start to feel all cooped up inside doing paperwork? Now imagine going through that as a child!

Our littlest people are designed to MOVE and EXPLORE the world with their hands and feet and at a certain age, even their mouths!  This is how we are designed to learn at a young age, through movement and interaction with our environment. 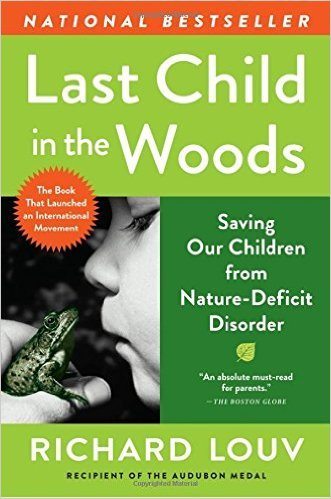 Childhood psychologist Aric Sigman calls this health/nature correlation the “Countryside effect”, and states that is is a considerable impact on one’s health. Not only are children who spend more time outside physically healthier, they scored higher on “concentration and self-discipline; improved their awareness, reasoning and observational skills; did better in reading, writing, maths, science and social studies; were better at working in teams; and showed improved behaviour overall.”

Please see this article: https://www.betterhelp.com/online-therapy/ for more information from BetterHelp on Online Therapy.

Do your children spend enough time in nature?

There was definitely a time period where we became a very technology-centric family. I noticed we fought more, our children were constantly agitated and became frustrated over the simplest things. As we transitioned back to an outdoor-centric lifestyle, they began to “level out” emotionally and the mood in our home became incredibly more joyful.

We have found the combination of children and technology only works if it is in balance with time spent in nature!

More from the Guru: Knives and Fires at Preschool? Yes, It’s a Good Thing.

Here is a place where you and your family can spend some quality time in Nature
http://Www.fabrikazahranaitanci.com

Wonder how much this brilliant study cost!! Who’da thunk it eh! Sheesh!

[…] More from the Guru: Study: Children Who Spend More Time in Nature Are Healthier and Happier […]

[…] Study: Children Who Spend More Time in Nature Are Healthier and Happier(Opens in a new browser tab) […]