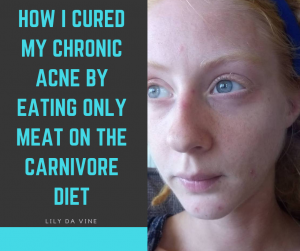 Anyone that’s had chronic acne even for a short time knows how hard it is to deal with, both physically and emotionally. As an adult that becomes worse especially if you’re thin like I am (and lived most of my live severely malnourished) and have people regularly mistaking you for a drug addict. Well it turns out I’ve been a lifelong drug addict without having any clue about it. My drug? Carbs, of all kinds from gluten to sugar.

Finally for the first time in more than a decade I’m starting to experience not just slight improvement but total clearing of my skin that’s previously been nothing short of riddled with terrible cystic acne that I had the terrible habit of picking at and making so much worse. When I looked in the mirror three months ago I was floored because I honestly did look like a drug addict, complete with dark circles under my eyes and sores literally all over my body from adult onset acne out of control. I was extremely unhealthy and felt like I was dying and I likely was.

So what did I do?

Same thing I did as a teenager with every over the counter acne product out there only this time with every natural product I could get my hands on. Because I live in Acapulco, Mexico I have a lot of access to natural health products many of which help if not work and I started trying all of them for my skin that were advertised to help. And some of them did help, and then things would get stressful or my period would come and I’d be back where I started having wasted hours tending to the situation that is my pock marked face.

Deep down the whole time I knew I’d have to quit sugar but considering I was a lifelong addict, the habit would die hard and I suffered for it.

I came across a Joe Rogan podcast featuring Jordan Peterson on his all meat diet on how his daughter cured her depression and childhood arthritis (and many other issues) just by eating beef, salt and water. It seemed extreme but it also seemed interesting and after listening to Shawn Baker talk about it on the same podcast for three hours we were convinced to give it a try.

John and I both have our reasons for doing it but many of them were the same: wanting less pain, more energy and an end to depression. Since starting the diet we’ve noticed a lot of changes, but that’s not what this is about. What I will say before continuing is I now have an extremely fit body without having to work out in a gym or anywhere else for that matter, just diet change and natural increase in productivity with extra energy.

Where I’m coming from:

I was raised primarily on processed foods and not much of them resulting in malnourishment that has really affected me these last few years. Just before the carnivore diet we were consuming carbs just like everyone else, both with and without gluten and sugar and I honestly felt terrible most of the time because of it experiencing symptoms like:

One of my big hopes with the carnivore diet was the hopes that it’d reverse the skin problems I have which aren’t limited to acne. Having tried everything I could think of I’d basically given up on my skin before this diet. Within a few weeks of starting the meat only diet my skin started to clear more than ever before.

More from the Homestead Guru: What Do The Healthiest People in the World Eat?

Now its nearly fully clear for the first time in more than 10 years and only shows further signs of clearing. This is the only thing that has worked.

What does it take?

I eat only animal products with salt, pepper and water. Within that definition includes:

I’ve considered the idea of quitting dairy completely as I know many people who go carnivore do need to quit all dairy even ghee and butter to clear their skin but I’m not so sure I’ll need to go even that far with how my skin is clearing already. I consume quite a bit of ghee and small amounts of cheese at the moment and am working on getting a supply of raw milk, something I’ve historically digested well. Some people are allergic to specific things within dairy products that make it so they absolutely can’t consume them, I’m not sure I’m one of those people.

Some people have difficulty with cured meat so there are a lot of people out there who don’t really eat cured meats like bacon as they cause reactions. Some people also report this with chicken, eggs and fish so what you actually eat on the diet is up to you and what you can tolerate. There are plenty of people thriving on just beef and a cow is a huge animal, there’s a lot more variety in that than you’d expect.

Salt is important, use liberally as much as you want. I crave different types of salt I find and I use a lot more but I find it is essential in things like energy level and head pain. Eating a salty meal with a lot of water can now cure a headache and take away tired feelings for me. Get creative with the salts, all of them do actually taste different! My favorites are flor de sal and pink himalayan if we’re talking about flavor and texture.

Some carnivores use seasonings but that too depends on you. I don’t do much chili pepper because it hurts my gut, but others do without issue. Some people can’t even use black pepper, where I put that on everything. My favorite herb is thyme and it’s really the only once I crave at this point.

How long does it take?

It takes at least a month to consider it a complete experiment in the carnivore diet to really see how it’s going to effect you. If you feel terrible for three weeks, consider the fact that your previous diet might have been rougher on you than you expected. It took three weeks of carb flu and cravings before I started to feel the energy carnivores talk about. The things I craved the most often made me feel the worst when I did cheat and indulge in them.

I can’t tell you how many posts you’ll find out there by people who “tried the experiment” for two weeks and quit likely because it’s hard. There’s a lot of crappy feelings both physically and emotionally and it takes a strong person to stick through it. It’s the hardest thing I’ve personally ever done being a food blogger and baker but it’s worth it. By a month in I was convinced it was for me and now two months in I’m planning for this to be a lifestyle choice as I feel my body thriving for the first time.

Around two months I personally really noticed a fast improvement in the clearing of my skin, but I will be clear that I wasn’t very strict with the no sugar thing often opting to just have tiny amounts of sweets here and there prolonging the cravings and the negative symptoms like acne. There was a several week period without any cheats where I felt great with intermittent cheats before and after. I could feel my skin become sore as I consumed even a tiny amount of sugar. For anyone serious, you’ve got to go all in at least until you achieve your desired results.

I’ve heard some people reporting skin clearing in as little as two weeks, some saying it took as many as 6 weeks as they discovered their bodies triggers, sometimes needing to eliminate foods like pork or fish. Some people, including myself, report an increase in acne temporarily which is worrying as the body freaks out and adjusts but now for the first time in ten years I can say my skin isn’t bothering me.

And that’s worth talking about!

At the very least the carnivore diet is an excellent elimination diet for those sensitive to foods interested in figuring out exactly what foods they’re sensitive too. Everyone is different and some people are way more sensitive than others in what they can tolerate.

If you suffer from severe acne or any of the things I mentioned that I suffered from, I highly recommend you give it a try at least for a month, you might be surprised! I will add I did think it was a crazy idea myself when I happened upon it, but the research has done tells me different and I can feel the meat and fat healing me bit by bit.

Why the Carnivore Diet Might Be the Secret to Acne-Free Clear Skin | GoodGlow.co

[…] that being said, the anecdotal results of the carnivore diet are pretty convincing.  Redditors, bloggers, and carnivore connoisseurs have had amazing success with the carnivore […]

Zote Soap: The MOST Useful Soap EVER ⋆ Homestead Guru

[…] More from the Homestead Guru: How I Cured My Cystic Acne by Eating Only Meat on the Carnivore Diet(Opens in a new browser tab) […]