This is the extraordinary story of a 16-year-old who built his own tiny home for just under $8k.

The best stories are those in which someone young does something extraordinary that no one expects. Matt Ryan of Tennessee defied all odds and criticisms and built himself his own tiny home starting at 16! By the time he was a legal adult, he had managed to complete it.

This isn’t just the story of some rich kid who made something interesting happen with his parent’s money. He worked 2 part-time jobs and made his tiny house by hand with no help. That is perhaps one of the most impressive parts of the story.

No one believed in his tiny home dream

He talks about how no one believed in him but he still managed to make it happen. Not only that but after high school graduation, he moved his tiny house from Tennessee to Pensacola Florida on his own.

This is one guy that you just can’t get down!

It all started with an 8.5×34 foot construction office trailer he found on Craigslist. He bought it with his own money and stripped it bare. Much of his construction materials, for example, the wood on the outside, were found in dumpsters and were salvage items.

His tiny home cost him just under 8k to build.

Most people make several times that a year and live with way less fun, freedom, and intention.

In some ways, he hacked the home-owning system that is stacked against the young. Most young people these days don’t have the savings to own their own home. He’s now living in Florida and going to nursing school.  His bills are nearly nonexistent. So, way to take a dream and make it happen, Ryan.

He shared this viral video on Youtube with a tour of his house to share with the world. His whole point is to show this is possible for anyone who wants it to be their reality. And he’s so right! The attention to detail for the sake of both aesthetics and efficiency in the tiny home is incredible.

All considered, the shots inside the tiny home actually don’t make it seem like one because he decided to have a first-floor bedroom separate from his loft. This led to an abundance of storage space and a more traditional living experience.

He was also intelligent with his design by maximizing living space by putting the tv in a position where it can be viewed from the loft. There are little spaces for storage everywhere. He even put care in choosing a location in the house for the bathroom that would provide access from either the living space or the bedroom.

In a world where the majority of the youth are thought to be useless, this guy breaks the stereotype with this amazing house. He is determined, disciplined, and crafty, and it shows in the space he created for himself. 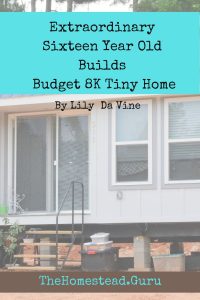 So I guess that begs the question, if the 8k tiny home is your dream too, what’s keeping you from it??

Check out this tour of a tiny home village from the Guru!