If there’s one thing I hate, it’s mosquitos.

Like, if I could wipe out any bug on the planet without causing environmental collapse, it’d be the mosquito. Living in Acapulco for nearly 4 years, I ended up with 3 different mosquito-borne illnesses. All of them awful: dengue, Zika, and chikungunya. Are GMO mosquitoes the answer to our problems?

British company Oxitec claims to have a genetically modified solution to all of our mosquito problems.

This is a response to a world where pesticides are breeding super mosquitoes that carry nasty illnesses in tow.

Personally, I’m not totally against the idea of GMOs if it’s done correctly.

Switching around mosquito genes is a lot more ethical in my opinion than adding fish DNA to apples. Also with extensive testing, you’d expect much less to go long. Oxitec has been reportedly trying to get the EPA to approve a permit for more than 10 years.

Editors note: This is an opinion piece and does not necessarily reflect the view of the Homestead Guru as a whole. I (Catherine, owner of the site) have plenty of questions about how GMO Mosquitoes will impact our ecosystem. If the females are designed to die, what will happen to female frogs or other animals who eat them?)

And on May 1st the EPA finally approved what is called an Experimental Use Permit (EUP).

This permit can be canceled at any time during the 24 month period should unforeseen circumstances arise.  The company last tried in 2016 but managed to get what they claimed was an upgraded version approved. If approved by local groups, the release will happen in Florida (Monroe County) and Texas (Harris County). There will be weekly releases starting in Florida early this summer. Both the Florida Department of Agricultural Conservative Services and the Florida Keys Mosquito Control District still need to approve it.

The EPA had this to say about their decision: “to meet today’s public health challenges head-on, the nation needs to facilitate innovation and advance the science around new tools and approaches to better protect the health of all Americans.”

How does it work?

So this is news to me but apparently, only female mosquitoes bite. Male mosquitoes are harmless and just eat flower nectar. Females consume blood to feed their eggs, something both morbid and fascinating.

Oxitec has just created a variation of Aedes Aegypti with a special gene that prevents female offspring from surviving until adulthood.

Over time logically the population would decline. They say it causes a “temporary collapse of the wild population.” It has already been tested in Brazil during the 2015-16 Zika outbreak and reportedly reduced the local population of mosquitoes by 89-96%.

Groups like the Florida Keys Environmental Coalition are protesting asking Oxitel to prove the safeness of these mosquitoes.

A Question that Came to Mind

I had a question come to mind, looking into this that so far hasn’t been addressed in the articles I’ve read.

What happens if we get rid of mosquitoes? How dependent is the world ecosystem on their presence?

I suppose this may be why the EPA granted a temporary permit in limited areas for 2 years that can be revoked at any time. Many people are concerned with the idea of releasing these genetically modified insects at all because being mosquitoes, they are going to be hard to catch should something go wrong in the field. Also, there’s always the very slight chance these could be super mosquitoes resistant to pesticides.

I’ll put up my tinfoil hat now and say most likely this is probably just a GMO that actually makes sense and might actually help people. The way I see it is if the changes they made are the only changes they made, then it’s likely going to be helpful. That is unless ecosystems are totally dependent on the mosquito. 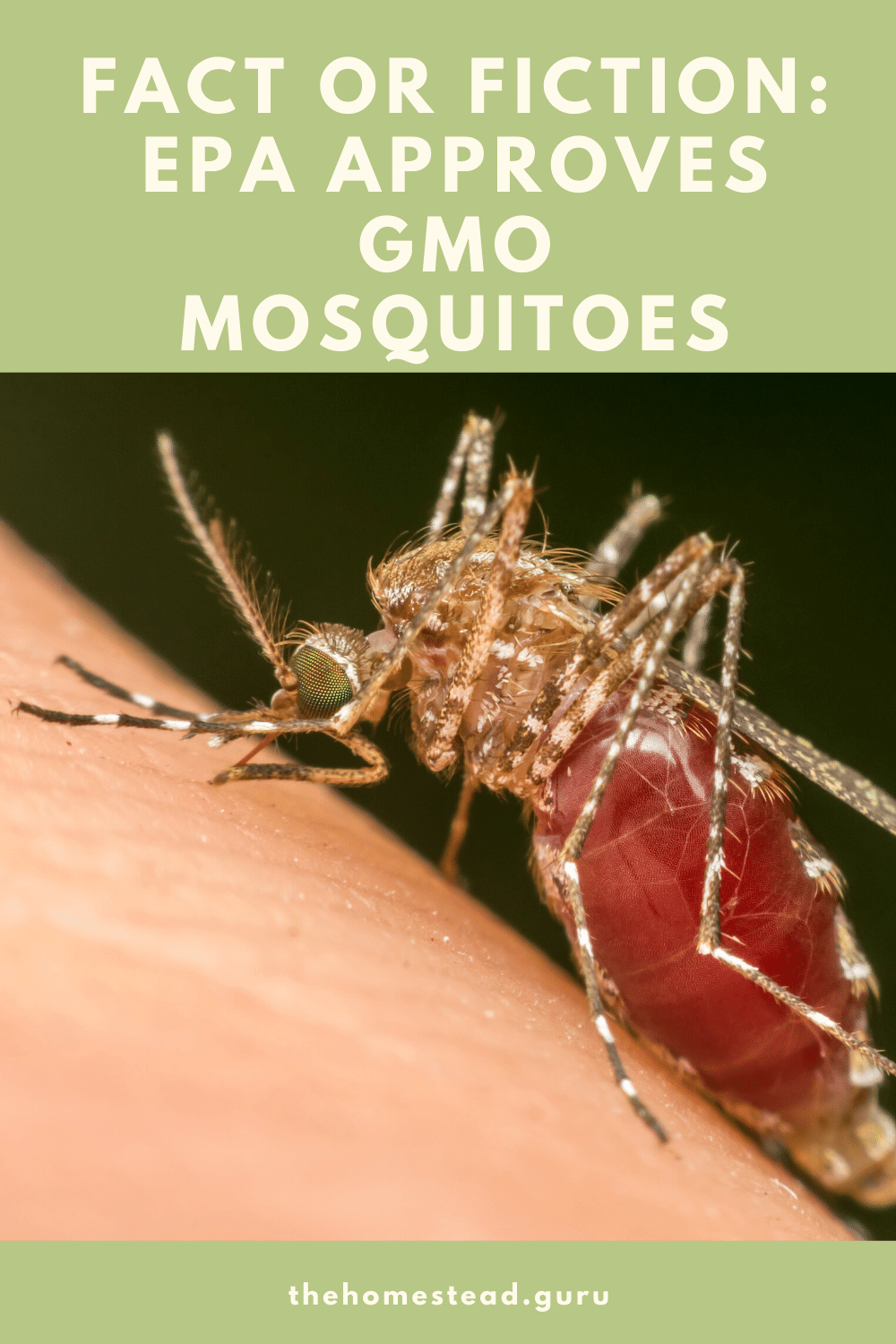 What are your thoughts on GMO mosquitos? Leave an answer in the comments!

Read more from the Homestead Guru: How Monsanto is Destroying the Brains and Health of Everyone

IF it’s done correctly… and that’s the big IF – I think we would really have to ask ourselves WHY they are doing it… it has probably more to do with eugenics than to be helpful – and MESSING WITH MOTHER NATURE is never a good idea. What about all the animals that eat mosquitos. Will they die because of it? After all, GMOs are part of what caused bees to die – they mess with our internals – and the animals – birds, frogs, other bugs that eat mosquitoes – its’ HORRIBLE. What is it going to do to… Read more »

I am on the same page with you here!