After what was realistically more than a 5 year battle, three herbalists have achieved victory legally effectively freeing “fire cider”, which is a traditional herbal concoction that has been produced for many generations. Their battle began in the courts over intellectual property to the name and recipe.

So what’s fire cider? It’s an herbal brew, a mixture of the following: apple cider vinegar, onion, garlic, horseradish and sometimes hot pepper and citrus. It boasts benefits that include: warding off the cold or flu, fixing sinus congestion, lowering blood sugar, curbing cravings and a digestive aid. It’s gained a lot of popularity in recent years thanks to the internet. 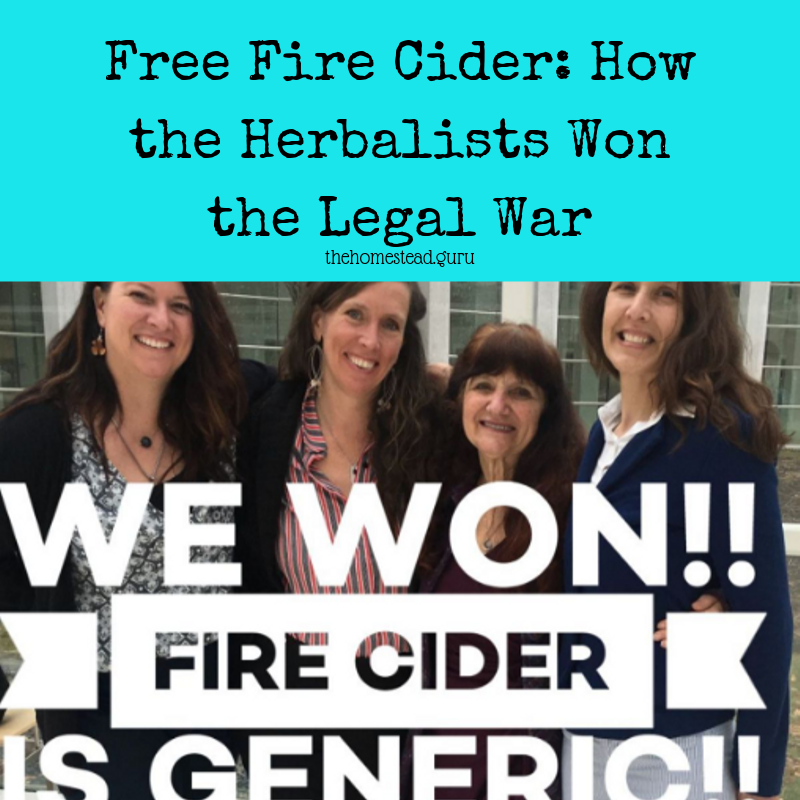 The drama all started in 2012 when Shire City Herbals trademarked the term “fire cider”. The trademark allows them to report anyone using the name for sales of the product despite the fact that they are not the ones who invented the term. Usually these laws are used to protect “individual ideas” but rarely end up doing so as it’s fairly common for more than one person to invent the same concept. Dana St. Pierre claims to have organically invented the name in 2010 for their products which are now sold nationwide.

More from the Homestead Guru: New Study: Women Sleep Better With A Dog in the Bed

This of course received uproar from the herbalist community, one that’s largely focused on the free sharing of knowledge. This was a recipe many people had been producing and calling fire cider long before Shire City Herbals took the initiative to trademark it. Many people blame “cold hard capitalism” for this without acknowledging the fact that if anything it was a fascist act, using governmental force to keep competition out of business. True capitalism promotes competition, so long as there’s no government influence like intellectual property laws.

The real problem here is the intent to control something with intellectual property that existed long before Dana St. Pierre went and tried to trademark it. They cited just trying to protect their business when really they should have been finding ways to use the common generic term and their use of it to their advantage.

So, after the trademarking of the term, Shire City Herbals started contacted smaller sellers on websites like Etsy requesting they stop selling the product. When they refused, they would report them for using the trademark without permission to get them shut down regardless lest they face persecution.

More from the Homestead Guru: The Medicinal World of Plants: White Willow Bark

Then in 2015 the lawsuits started, three to be exact towards: Mary Blue, Nicole Telkes and Katheryn Langelier. This was all in regards to their use of the term fire cider. While Shire City Herbals intended to crush them with these lawsuits what actually ended up happening was that a movement was started, one for freedom of knowledge. These women argued that the term fire cider was generic, and they proved it.

The earliest source they found of the term was in a 1980’s home study course by Rosemary Gladstar although it was likely used long before that. St. Pierre claims to have no knowledge of this text and even if they didn’t that doesn’t give them right to trademark a term that has been used in general herbalism for a long time.

So Mary Blue filed a change.org petition to get the trademark listing removed to free the term fire cider as a generic term. They also posted a recipe and how to guide for making fire cider on their website in a further effort to share the information and decentralize the movement. Shire City Herbals tried to establish a monopoly and they instead started a #freefirecider movement instead that aided in the destruction of their case against these three herbalist women. The three women banded together with the support of Rosemary Gladstar to appeal to the judge.

This finally came to a close this week after a 9 day trial. Judge Mark G Mastroianni of the U.S District Court of Massachusetts ruled in a 40 page decision that the term fire cider is indeed a generic term, meaning victory for herbalists worldwide, except for Shire City Herbals of course.

In a country where most of the legal rulings of this nature don’t go the right way it’s good to see the people winning and change happening. It’s one of the few court rulings I can think of that has moved to protect the average person instead of the company “just trying to protect it’s business.”

This should be a message for all small businesses out there, avoid using the state and it’s laws to protect you and instead find ways to set yourself apart otherwise. It’s always bad business to attack your competition with government might.

How to Make Fire Cider.

How to Create an Outdoor Zen Garden » HG

[…] More from the Homestead Guru: #FreeFireCider: How the Herbalists Won the Legal War(Opens in a new browser tab) […]