Will the US Legalize Cannabis?

Today, the key committee of Congress has voted to legalize cannabis by lifting the federal ban. If this makes it the rest of the way though Congress it will not only reschedule Cannabis but it will help take back old mistakes as far as the drug war is concerned. As someone who has been a soldier in the drug war, I think moves like this are long over due even if my pessimist nature makes it hard for me to see this actually getting passed despite the fact that there is overwhelming support for it.

More from the Homestead Guru: Cannabinoids: The Other Vitamin “C”?(Opens in a new browser tab)

This is marks the first time that Congress has voted positively on a legalization bill, making history before it even reaches the House of Representatives or the Senate. If passed, it will be up to states to start regulations as well as to start work expunging records with cannabis crimes and retrying other cases that are still open.

For those who aren’t aware, 4 years ago I was arrested for Cannabis related felonies in the United States, 5 of them to be exact.

Having had an unconventional childhood I took the unconventional route with my partner and codependant and moved to Mexico to flee the charges. Since then my home literally became a war zone through cartel violence. As I see it, everything that has happened to me in the last 5 years is a direct result of the drug war.

So I have an interesting take on things like this as they effect me directly more than virtually anyone I can think of, now that John Galton has been killed. This legislation which has been dubbed the “Marijuana Opportunity, Reinvestment and Expongement Act” will not only reschedule marijuana but seeks to clear the record of marijuana offenders nationwide. For someone who is directly affected by bad cannabis laws, this gives me hope for the future.

More from the Homestead Guru: A License To Chill: Permits for Nature(Opens in a new browser tab)

When I was in jail, I met the Deputy Sheriff who was showing around investors asking for more money, since the women’s wing of the jail was too small. The crazy thing is, if I had to estimate more than 80% of the women in that jail were there for drug related offenses. But when I met that Sheriff he asked me what my crimes were, so I told him. His response?

“You shouldn’t be in here, we have bigger concerns to deal with than marijuana”.

I responded by asking if he’d release me and he laughed and said no, moving on with his tour. His words didn’t change my fate, but they did show me that even people I considered ignorant were aware that weed is not to blame for the problems of the world. 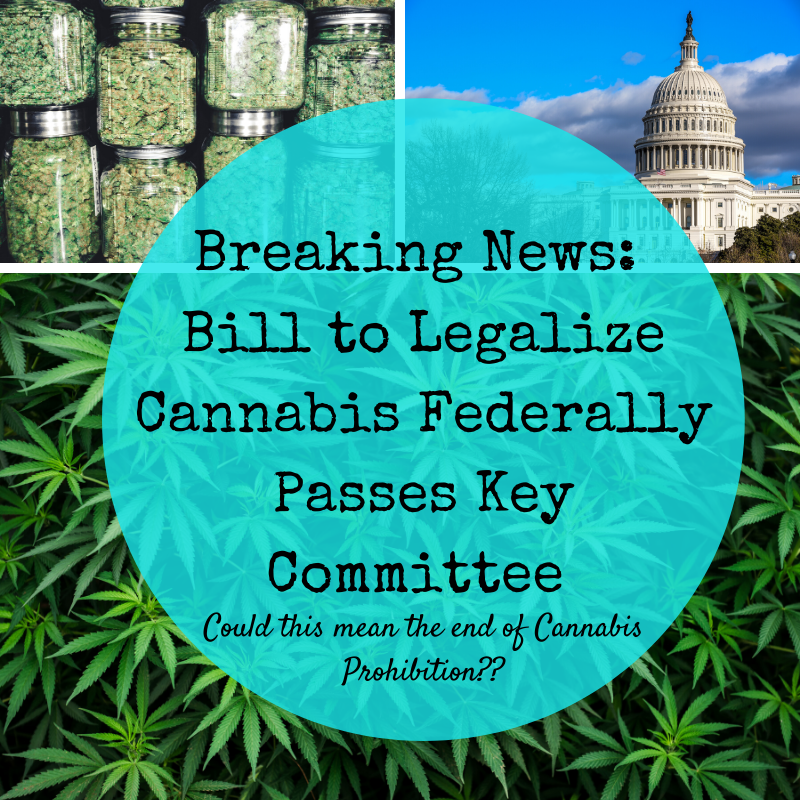 This act to legalize cannabis was introduced by Chairman Jerrold Nadler and is sponsored by Kamala Harris.

It reportedly has bipartisan support so despite my pessimist feelings it seems like there’s actually a chance of it passing. Now that it’s past the Key Committee all that’s left to do is see how the houses of Congress respond. People say that the House of Representatives (mostly democrat) is likely to pass it, if it does die it’ll likely be in the Senate which is mostly controlled by the GOP. This is all a response to the failed War on Drugs, something I’ve been passionately fighting against for the last 10 years.

The bill clearly defines its intentions as a means to

“decriminalize and de-schedule cannabis, to provide for reinvestment in certain persons adversely impacted by the War on Drugs, to provide for expungement of certain cannabis offenses, and for other purposes.”

For people like me, this is huge. I often say the only negative impact that cannabis has had on my life lies in its illegality and I still believe that. My life has been extraordinarily difficult literally since birth because of the prohibition of cannabis. My parents met because my Mom was a cannabis dealer, and I’ve seen nothing but bullshit come from the government over a plant I’ve never seen harm anyone.

Not only will it remove marijuana from the Controlled Substances Act entirely, but it will also require federal courts to expunge prior marijuana-related convictions, provide grants and funding to communities most harmed by our failed war on cannabis consumers, and finally allow physicians affiliated with the Veterans Administration to recommend medical cannabis to veterans.”

This could be the end to Cannabis prohibition as I see it, and it actually seems possible.

More from the Homestead Guru: This Family Fled to Colorado to Save Their Son(Opens in a new browser tab)

I know if my partner John Galton were still alive, he’d be extremely excited. He didn’t live to see Cannabis prohibition end in his lifetime, but perhaps I will.

Articles about the attempt to legalize cannabis:

House Bill Text for This Bill

[…] Breaking: US Government Moves to Legalize Cannabis(Opens in a new browser tab) […]

Illegal Weed Is a Deadly Policy: My Story and My Hope for Decriminalization » HG