Around a year and a half ago my husband and I found ourselves in a very dark place. We had bought a business that was not providing for itself financially, our son had broken his femur in a freak accident (at the store we bought) and was in a lot of pain (and we were billed 40k!), and we spent every waking moment trying to come up with the funds to meet our past due obligations. Major past due obligations. 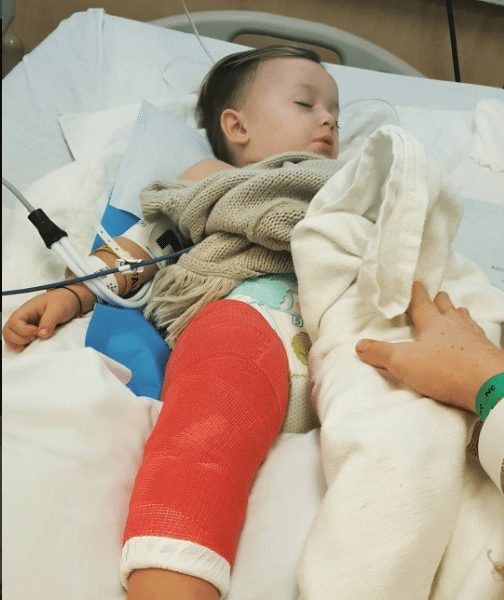 We literally did not have money for food, every penny that came in went to our business. It was exhausting and made me so mad. I was working so hard and giving every waking moment I had to surviving, but I got to keep nothing, it just passed through me and straight to those whom we were in debt. People began to lash out at us, called us horrible names in our moment of weakness. They attacked us, from all directions. I felt like I was living in hell.

Our Dearest friends would show up with groceries, we would go to the food bank, and we would ask for grocery gift cards for holidays and birthdays. We were scared and working very hard – we worked side jobs, hustling as hard as we could. While my son’s leg was broken I block walked to get signatures to keep Uber and Lyft in Austin, pushing both children in a double stroller, in the cold, after working all day at the store.

We literally felt like we were in hell. We were fighting, we were sad, we were scared. It was very very very very hard. And then someone we worked with introduced us to the Hindu goddess of abundance, Lakshmi. 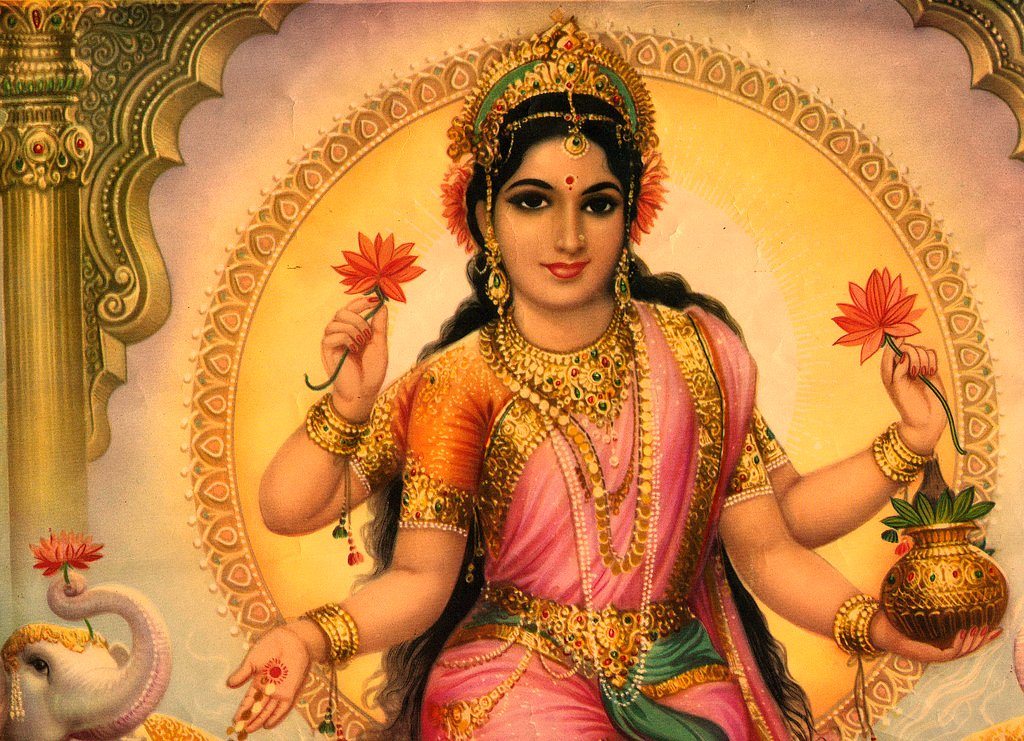 Lakshmi represents both spiritual and material prosperity. In her four arms she carries lotus flowers and gold coins. The arms represent the four ends of human life: dharma or righteousness, “kama” or desires, “artha” or wealth, and “moksha” or liberation from the cycle of birth and death.

We realized we were making decisions based on fear and decided to take a new approach. It was hard at first, but we asked ourselves (every day), “What would Lakshmi do”?

What would Lakshmi do?

By asking ourselves what the Goddess of Abundance would do, we began to make brave and bold decisions. We began to slowly, one choice at a time, take ownership of our own destiny.

I began to listen to Lakshmi mantras on youtube every day. I would sing Lakshmi mantras as I walked between houses to get signatures for Uber and Lyft. I would meditate on abundance and wealth and put myself in the mindset of true prosperity. Here is one of my most listened to:

Soon we decided to step it up from “What would Lakshmi do?” to “I am Lakshmi”. We realized that truly, we are all Lakshmi, if we choose to be. Abundance is not some external thing to strive for or to try to emulate, it is truly a state of mine that manifests from within.

From Darkness to the Light

As we began to step into this energy of Lakshmi, dramatic changes began to happen in our lives. We lost our tolerance for unethical people in our business and personal lives. We began to prune our life down to the bare minimum. Abundance does not include perpetually negative people, ongoing anger, or dishonesty of any kind. We ended relationships, fired people, turned away vendors, and began to recreate ourselves. 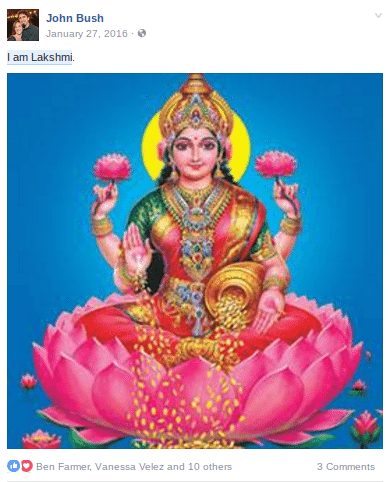 At first our revenue began to decline. We were pruning. We were removing that which did not work. We were learning to say NO. In fact, we had a theme song last summer that helped us to set STRONG BOUNDARIES:

We began to parody this song in all areas of life. When we found situations in our life that did not vibe with our new abundance attitude, we would break into song and suddenly we found a hint of happiness and fun in our lives again. Cutting out the negativity was FUN.

I changed my ring tone to a Lakshmi mantra. We branded our blog The Homestead Guru with personalized Lakshmi images for ourselves and our writers, and our kids would turn on Lakshmi music to jam during the day. We truly became Lakshmi in our hearts. 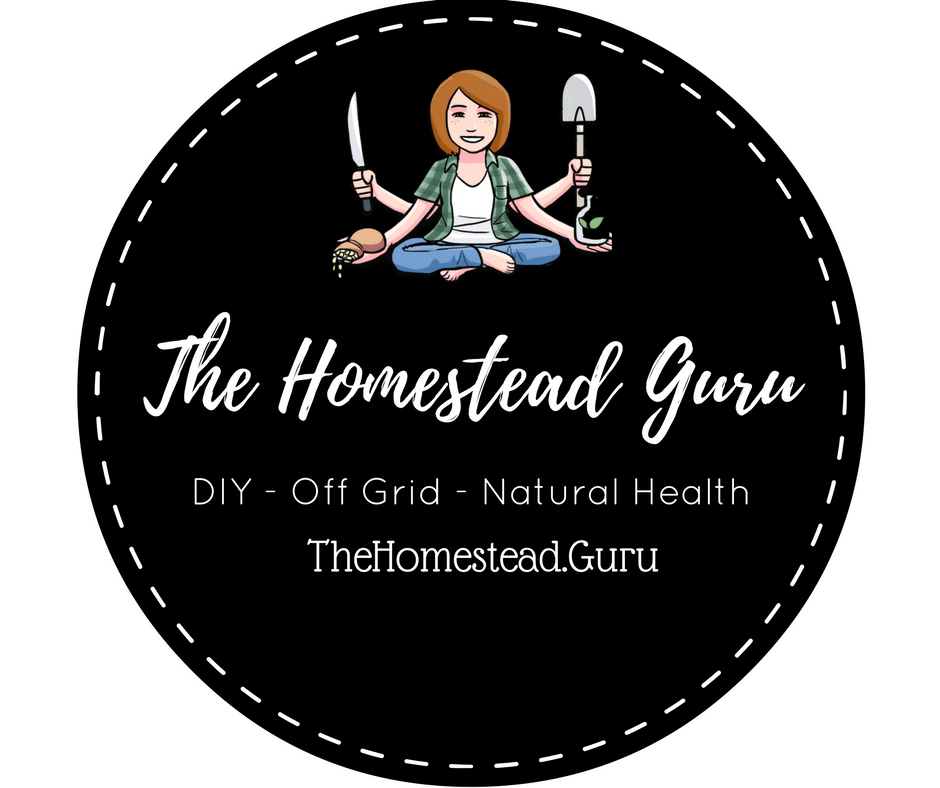 People began to comment how different our store was, how positive it was, how good it felt. The revenue continued to decline, but new people and new opportunities began to appear in our lives. While we had the opportunity to feel more fear, we instead stepped into Lakshmi and manifested resources and relationships to supplement the store while we did the pruning it needed to fly. Our blog began to provide revenue that could not only buy a round of groceries each month, but also pay the bookstore‘s rent (or part of its rent) a few times. The hospital sent us a letter and said we did not have to pay the 40k, that their nonprofit had covered it. We began to see Light.

We found out who belonged in our tribe. Those were the people offering us a hand up every time we fell. The people giving us a soft place to land as we bumped along rock bottom. The people holding us while we cried. They were the people who believed in us, who supported us, and lifted us up in our time of need.. The people who did not belong stuck out like a sore thumb. They were the ones ridiculing us, gossiping about us, and making passive aggressive comments in our presence. We felt so blessed to SEE who was RIGHT for us and began to take more immeidate action every time we were confronted by energy that didn’t “fit”.

Tim Ferris says you can judge your potential for success based on the amount of uncomfortable conversations you are willing to have. We had many. Some people stepped up into the Light with us, others scurried off to stay in the darkness, and some tried to desperately grab at our ankles and drag us back to the darkness with them.

Then one day, everything changed. The dead weight had been removed, the bricks tied to our feet had been smashed, and we began to rise. Suddenly we didn’t have to work side jobs. Suddenly the store was paying for itself. Suddenly we were digging out of the huge financial pit of debt we had found ourselves collapsed into. Suddenly we were not afraid. Suddenly, we were Lakshmi. 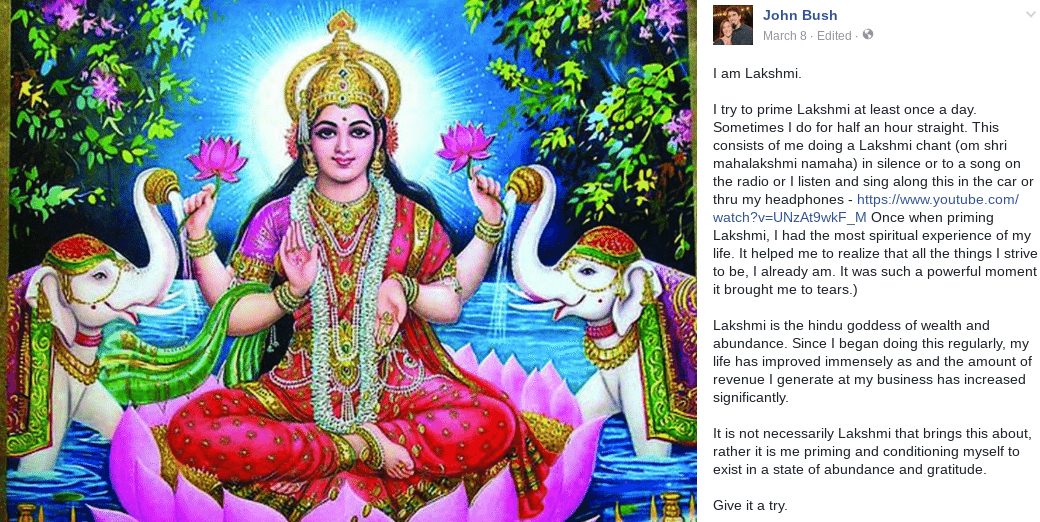 We are still climbing out of that huge pit of debt…. It is now more like a hole dug in the sand in the beach. Waves of prosperity are washing it away, the hole has become more shallow and manageable. Definitely something we can handle, because we are manifesting mofos. I now have an amazing team of writers and an editor for the guru. We have created not only prosperity for ourselves, but for many of our Dearest friends who work tirelessly beside us. Our last three months were the most profitable ever for our bookstore, and our joy factor has increased a thousand fold. 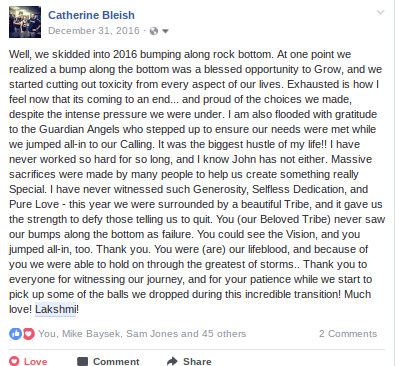 My editor Cody said something to me very profound yesterday, that when he asks the universe for what he needs, he makes sure to indicate he is ready to WORK for what he deserves. And that is the trick, you cannot just get your head in the space of Abundance, you must also get your Actions in line with abundance. Every choice, every day. Be Abundant in action and thought and the Universe will reward you.

Lakshmi is more than manifesting money. Its about manifesting abundant love, strong relationships, healthy boundaries, and inner peace no matter the storm that rages around us.

I am Lakshmi. So are you.

Here is our new favorite Lakshmi mantra, John listens while he drives in the car, I listen while I work at home. Enjoy!