In my previous posts (1)(2)(3) related to the inflammatory condition known as “microglial activation” I mentioned that the microglia have been found to exist primarily in two different states, “surveillance

state” and “activation state”.  The beneficial “surveillance mode” is where the microglia clean up debris in the nervous system, fight infections, and build neural connections.  The harmful mode is where the microglia shift into an “activation” state and secrete toxic substances which break down the nervous system.  Minimizing this shift into the activation mode appears to be central to preventing all forms of neurodegenerative conditions, including ALS, Alzheimers, Parkinsons, non-situational depression, etc.  It is recommended that you read my other posts on microglial activation and its relation to chronic infections, diet, and vaccines to gain a true appreciation for its significance to overall health.

Research indicates that the shift from the surveillance mode into the “activation state” is dependent on the level of “glutathione” (4), which is an antioxidant that our body produces by combining the amino acids glutamine, cysteine, and glutamate.  To gain an appreciation of how powerful glutathione can be, check out this 3 minute video of a man who has Parkinson’s respond to an IV push of the antioxidant.

Melatonin can ramp up glutathione production.

While there are glutathione supplements that can be taken, in addition to the IV form used in the video above, there can be issues with absorption and cost of these methods.  Perhaps the best way to get glutathione levels up is to take something that activates a cellular “switch” called “Nrf2″.  Nrf2 is a protein sitting inside our cells waiting for a trigger to direct it to bind to the DNA within the nucleus of the cell to produce a number of important antioxidants, including glutathione, superoxide dismutase, heme oxygenase, and more.(5)

Research suggests that the hormone melatonin, most commonly recognized as “the sleep hormone” secreted predominantly from the pineal gland, is capable of activating Nrf2, and therefore leading to increased levels of a number of important antioxidants, including glutathione.(6)(7)(8)  For this reason, it shouldn’t be surprising to find that melatonin has been found to protect against microglial activation. (9)(10)(11)

How does Monsanto relate to the issue of melatonin?

Monsanto’s “RoundUp” residue which is being increasingly found on genetically modified crops(10), in addition to conventionally raised wheat, has been shown to alter gut flora to become dominant in pathogenic bacteria(11), which in turn may fuel microglial activation.  Additionally, consuming GMOs has been shown to result in low levels of tryptophan (12), which is a precursor amino acid for the production of melatonin.  Therefore, consuming RoundUp laden food is almost certainly resulting in sub optimal levels of melatonin, thus impairing neurological protection to microglial activation, but it’s also fueling some of the prime factors which promote it, namely pathogenic bacteria.   In other words, you get the ole “one-two punch” from Monsanto when you consume their gmo products as it relates to melatonin levels.   The first punch comes from the pro-inflammatory state that disrupted gut flora creates, and the second comes from the low levels of melatonin as a consequence of low tryptophan levels.

It’s worth noting that melatonin is also indicated to be important in the health maintenance of the intestines, with a role in preventing “leaky gut”, and its repair.(13)

Additional noteworthy properties of melatonin, unrelated to sleep, include: 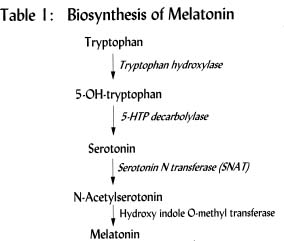 What does a wireless world have to do with melatonin?

Electromagnetic smog, or EMF is the term used to describe the collective energetic fields generated by high power lines (ELF), wifi/cell phone towers/smart meters(rF), and dirty electricity.  Research indicates that some people are highly sensitive to this smog, and there is an abundance of evidence now to support the idea that EMF has adverse effects on cellular function, including a decrease in melatonin levels.(27)

A primary mechanism behind how EMF may lead to low levels of melatonin is due to the fact that EMF has been shown to increase the production of the potent pro-inflammatory free radical known as “peroxynitrite”, which could have the effect of exhausting bodily supplies of anti-oxidants, including melatonin.(28)  Just as high amounts of gasoline around a brush fire will lead to less brush, high amounts of potent free radicals like peroxinitrite may lead to less melatonin.

“You are sitting in levels (of radiation -3, 4G) that are approximately one million billion times above natural background… Therefore you must ask yourself, do we through evolution have a microwave shield built into our bodies? …of course we don’t.” – Ollie Johansson of the Karolinska Institute in Sweden.

How solid is the science on EMFs affecting health negatively?  Very!

The video below is of Professor Martin Pall, PhD – professor of Biochemistry and Basic Medical Science at Washington State University, Pullman., presenting the findings of 23 studies showing that EMF directly affects an important cellular system called “voltage gated calcium channels”.  The consequences of this have global effects within the body, but specifically this appears to be a chief mechanism in how EMF exposure, which is now ubiquitous, may lead to chronically low levels of melatonin.(29)

To make matters worse, fluoride, which is added to many water supplies has been shown to calcify the pineal gland, and further impair melatonin synthesis.(30)

Research indicates that Monsanto’s RoundUp is promoting brain inflammation by shifting our microbial balance to become dominant in leaky gut promoting pathogenic bacteria, while simultaneously robbing us of  melatonins precursor building block tryptophan.  EMF from our multiple wireless devices, power lines, smart meters, and dirty electricity is further impairing melatonin levels by increasing free radical production, while simultaneously impairing synthesis of this antioxidant hormone.  As melatonin levels decrease, glutathione levels can be expected to wane thus leaving the microglial cells in a state where they are more likely to become activated and destructive, thus fueling the degradation of our brain and nervous system.

While you may be able to avoid the gut altering and brain inflaming Monsanto products, it’s difficult to escape being exposed to EMF, and that alone should make melatonin supplementation a wise move for most people not living on an island in the middle of nowhere, regardless if sleep impairment is an issue or not.

Hi Vlada,Impaction in the digestive tract comes from many tnhgis: for one, eating a diet deficient in fiber (dairy, animal products), deficient in enzymes and water (all overcooked foods), and full of processed foods- artificial sweeteners, diet or low cal foods with preservatives, soy protein isolates, etc. that creates slowness in the digestive tract. Foods moving slowly through the digestive tract can bake in there and start to stick, as the body is over 98 degrees.Secondly, most people’s digestive tracts are in a compromised state, and aren’t absorbing nutrients as well as it could or moving foods as quickly as… Read more »