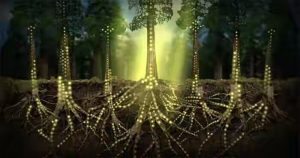 Fascinating new research has revealed that we’re not the only species that use an internet to communicate.

Plants may seem like they don’t do much from day to day, but they are actually able to send and receive complex communications from one another using something called mycelium–which is what mycologist Paul Stamets calls the internet of the natural world.

When we think of fungi, we usually think of mushrooms–but mushrooms are only the fruiting body of organisms called mycelia. Mycelium (plural) look like white hairy threads just under the surface of the forest floor (or your wood chip pile). You may not be able to see mycelium at all, since it’s often just a single cell thick.

In about 8 cubic inches of healthy forest floor, there is as much as 300 MILES of mycelium running through it like a tangled, complex, finely spun web.

The latest research shows that mycelium is sentient and self-aware, and it acts as a communication tool between the plants around it.

If a particular plant is being ravaged by insects, it can send hormone-like messengers through the mycelium to its neighboring plants, and they will send out defensive mechanisms to avoid getting munched on themselves.

What’s more, plants can share nutrients, minerals, and even water resources amongst themselves because the mycelium can transmit these things between herbs, grasses, and even massive trees that may be miles apart from each other!

The historical record shows that fungi existed on land several hundred million years before plants were, and we now know how they helped pave the way for plants to thrive.

Mycelium also contains an acid which breaks down rocks, thereby making minerals available in the soil.  Fungi are becoming recognized as gateway species, crucial to the development of healthy ecosystems. Mycological action even boosts the bio-availability of other soil nutrients and converts soil toxins into usable resources for all plants. 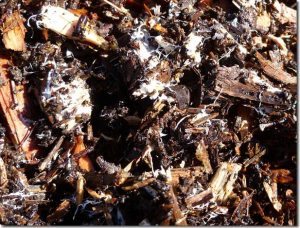 Gardeners are starting to realize that building their soil with things like compost and rock dust makes a huge difference in the health of their plants.

However, a healthy soil that includes mycelium is going to do the work for you!

You can buy mycorrhizae as a soil amendment, or you can simply mulch your garden and yard heavily with wood chips, and let the mycelium get to work!

Learn more about how plants communicate with each other via “the woodwide web“ below: