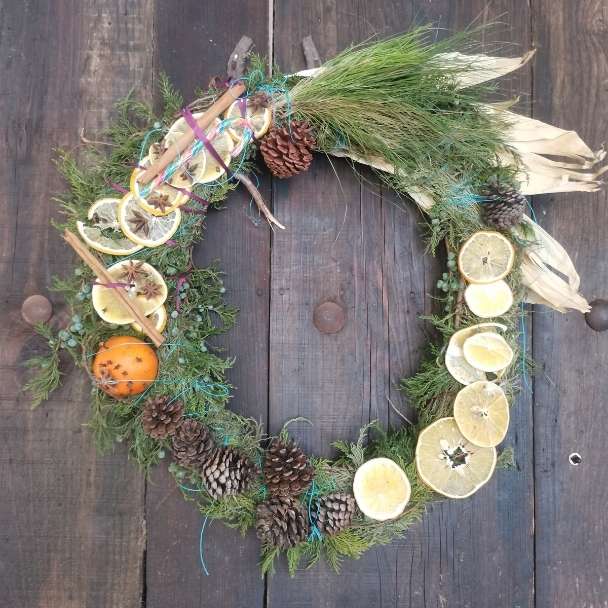 Is it really Yule without a Yule Wreath Tutorial?

Well it’s officially Yule and I am festive. Yesterday was the solstice and the great conjoining of Jupiter and Saturn which evidently marks the beginning of a renaissance. And I am here for it.

A Yule Wreath Tutorial For All

So I’ve been festive this year, making many of my decorations from locally sourced materials. The first of them was this wreath. I foraged the juniper and pine from a local forest where we hiked up to last week. The next morning I looked at my materials determining what to do with them and the idea for this wreath was born.

Check out this incredible yule tree skirt on Amazon!

I started by shaping the circle and let it sit while I sliced and sun dried oranges. Sure, we have an oven but those cost money to operate and I live in Mexico its still sunny. So I dried them in the sun over a few days. Sure they had bees and ants on them but it doesn’t matter because they aren’t for eating.

I like the idea of a wreath because whenever you enter the house you are reminded of the fact that it is yule. The new year is coming and this is the perfect way to help usher that in.

Beyond that for those curious I guess one Celtic pagan tradition is to open the front door before midnight and close it after. This is to let out the old year and let in the new. I saw this on a meme that jokingly mentioned opening all doors and windows for the best effect to get rid of 2020. Hey, whatever works.

The added bonus is this smells AMAZING and being fresh it is like hanging a giant loop of potpourri outside your house. 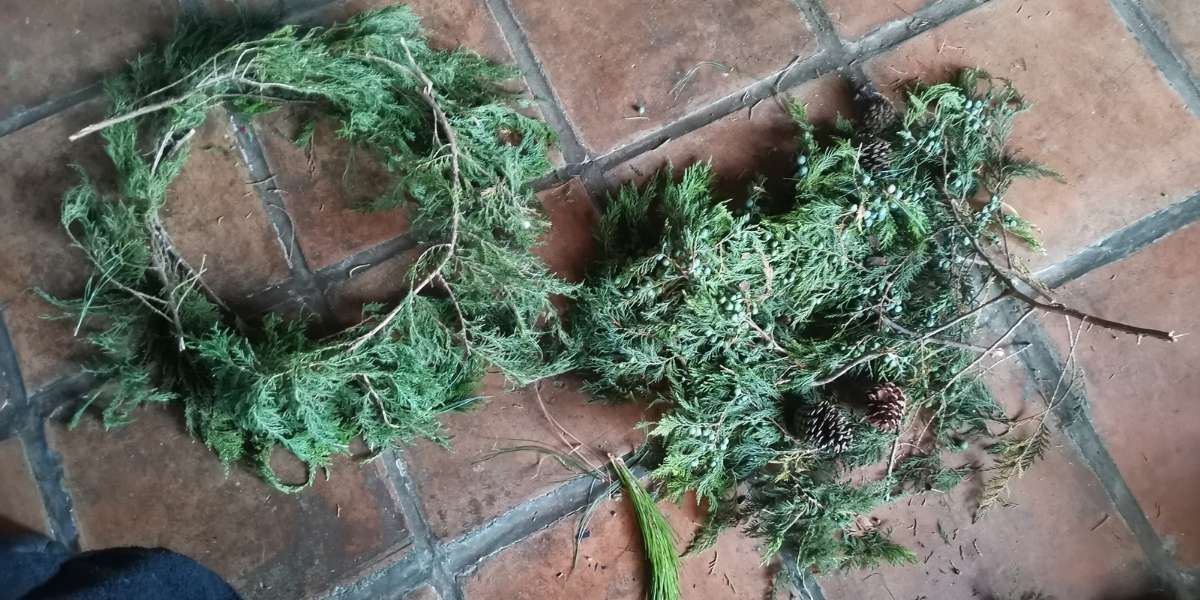 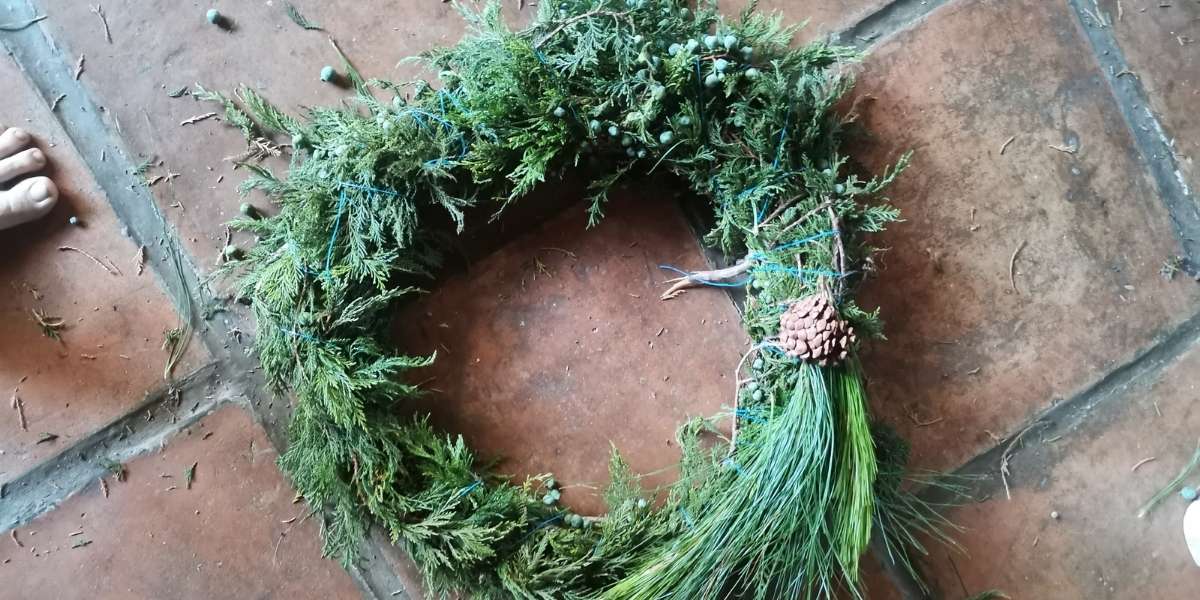 Instructions for the Yule Wreath Tutorial

The nice thing about juniper is the branches go in curls anyway. I collected basically a whole resuable shopping bag worth along with about 10 pine cones and many more juniper berries. A lot of recipes both witchy and otherwise include juniper so part of the goal was to have some on hand.

I just tried to evenly arrange the sticks in a circle. I saved a bit of each kind of pine for the smudge stick I made that I’ll share in a few days. I said I was going all out and I believe it.

Then I just used some nylon thread I have that someone gave me to tie a knot around it then wrap around the whole thing to tie in the sticks to a uniform shape.

For the oranges I literally sliced them about a half a centimetre thick and laid them on the concrete edge of the pool outside my house that gets several hours of direct sun. It took about a day and a half. I tied some of them to the wreath and other pieces I glued with silicone glue. You can do whatever floats your boat. I added the cinnamon, pine cones and other things using string too.
I let it sit in the sun for a few hours to be sure about the oranges before hanging on the door. It’ll hopefully remain there until the new year.

Looking for more ideas for Yule? Stay tuned as I have a few posts I’ll share over the next week of the other things I’ve been doing.

Also check out this Prosperity Candle tutorial I recently shared! 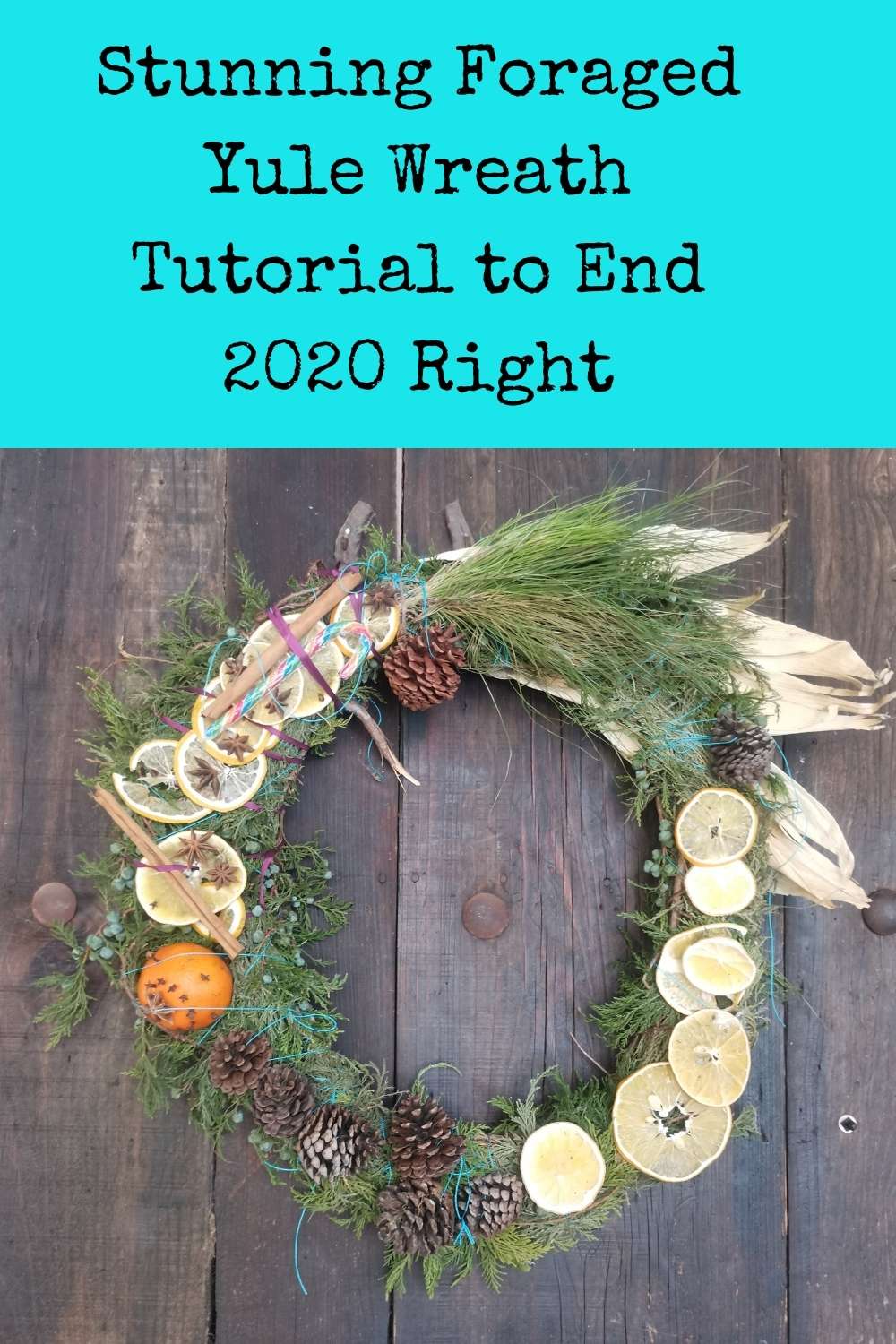 […] attached and some ponderosa pine needles. I got these when I harvested the materials for that wreathe I shared […]