I came across this article that Scented Candles may be poisonous. Although the title and Picture attached were very misleading, it had some interesting information.

The article states that Professor Alastair Lewis from the National Centre for Atmospheric Science at the University of York has found that the main ingredient Limonene, in most scented candles, is toxic when burned. The Limonene turns into the poisonous gas formaldehyde. Formaldehyde in cabinetry creation back in the 80’s for instance  off gased for a very long time. It even warned us about it in the old ’86 Winnebago brochures we found when we purchased our home.

According to Dr. Lewis the off gassing can be combated by opening windows. Well that doesn’t seem so bad!

There are many easy alternatives to avoid possibly being poisoned by Formaldehyde. You can diffuse Essential Oils into the Air. Even though I have heard controversy over this recently as well. I suppose to each their own.

Another suggestion I saw a commenter say was, “I take some cinnamon, allspice, ginger, whatever spices you have in the house, put them in a mason jar, add water, and set it on my candle warmer. Your house will smell like you just baked something yummy and all the ingredients you used are totally natural. You just need to keep an eye on it and add more water when it evaporates. You can do the same thing with lemon, or oranges. I’ve even used some small branches from my evergreens in the yard.” 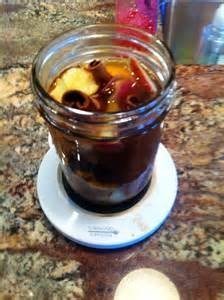 I thought that sounded like a great idea. There’s nothing better then coming home to a house that smells like fresh baked pie! I will absolutely try this out later. I don’t have a candle warmer that just plugs into electricity, but I do have a stove and a pot.

So if you think it is important for your families health, you might want to try the more natural way of bringing a sweet aroma to your home.