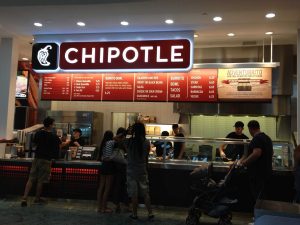 Even the most dedicated health-foodies sometimes need (or want) to eat out – and for that, I’m glad there’s Chipotle.

Sure, they’re a big business, but they’re actively trying to find ways for sustainability and ethical food to harmonize.

Chipotle just announced that almost 13 million pounds of their beans are now being sourced from farms that are seeking to transition to organic standards.

They’re paying the farmers a higher price per bushel, which will help the farmers afford the overwhelming process of getting certified as organic.

In 2015, Chipotle made headlines by pulling carnitas off the menus everywhere when their pork supplier failed to meet quality standards.

Quietly switching to conventional pork would have been shady easier (and undoubtedly what most other restaurants would have done). Chipotle went for integrity instead and scored big by impressing its customers.

However, last year, their purchases of organic beans and rice dropped drastically–and people noticed. So this move to support transitional organic farmers is well-calculated to regain the public’s faith.

This isn’t the first time that Chipotle’s stance on sustainable, natural ingredients has come under fire, however.

Chipotle had issues with e-coli outbreaks in late 2015, and people were quick to blame their local and organic ingredients.

The public’s suspicion focused on “small farmers who probably can’t keep up with industry standards for food safety”.

Never mind that the standards of safety for American food are already pretty low.

Higher costs combined with lingering public resistance make sourcing organic, non-gmo, and local foods ethically a challenge for many restaurants. That doesn’t stop the stream of criticism for what Chipotle is trying to accomplish, however.

Chipotle is far from perfect, but I think they’re headed in the right direction.

They believe, like Joel Salatin of Polyface Farms, that transitioning our food marketplace to sustainable practices isn’t impossible.

Hi, krystal: Good to discover you and some of your work. That said, I’m wondering if you might help me find some like-minded people to assist me in fulfilling a few of my Auspicious, Audacious, Ambitious BUT Altruistic Bucket List goals beginning with a need for the following: Seek Retired health-oriented couple with own income & RV or Trailer who would like to provide Groundskeeper/Caretaker Duties in exchange for: • FREE: RV or Trailer Rent ………..PLUS FREE: RV or Trailer Hook-up • FREE Utilities ……………………….PLUS FREE Organic Garden Plot Decatur, AL: LEAVE MESSAGE: 256-350-2823 or email: gmcoffey@aol.com ============== My Bucket… Read more »