Modern medical science relies heavily on pharmaceuticals to treat patients. In fact, the use of medicinal plants has become taboo and is often labeled (incorrectly) as pseudo-science.

There was a time in American history when big-Pharma did not have such an influence on doctors, pharmacists, or medicine. During this time, pharmacists actually prepared medicinal plants for people in need to treatment.

This recently uncovered medicinal plant map was printed by the National Wholesale Druggists’ Association over 80 years ago. It was intended to boost the image of the profession during a promotional campaign called Pharmacy Week.

The medicinal map shows which herbs grow in which state (or as they grew in 1932). It also lists the medicinal uses of each plant.

In the late 1930s and through the 1940s, a rise in synthetically produced and mass marketed drugs began to hit the market. This marked a transition from pharmacists physically preparing medicines to pharmacists counting out pre-made medicines.

This poster show the end of an era, before the profession made the shift to dispensing drugs produced by large corporation and away from preparing plants for those in need of their medicinal properties. 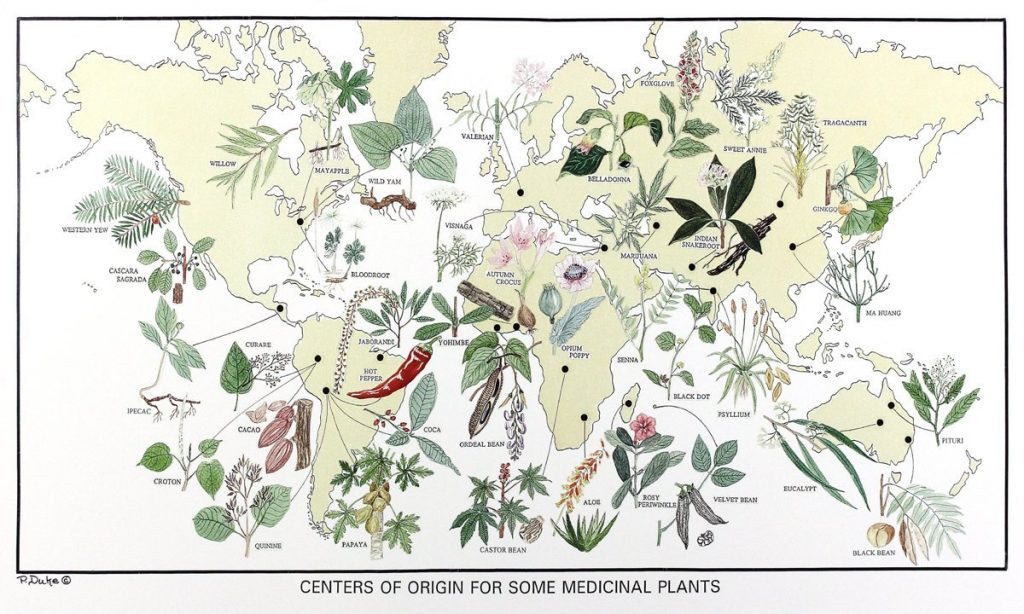 Have you ever tried natural remedies at home? Have you ever wild harvested medicine? It is in everyone’s interest to know as much about this as possible! We hope you enjoyed learning about this map of medicinal plants – please continue reading about natural medicines if you find this topic to be of interest:

Scientists Have Found Over 28,000 Plants Beat Diseases Like Cancer and Diabetes

Watch Natural Medicine Be Made in an Italian Co-operative

How do I get a printed copy of the medicine map?

I think you will have to print this one, I have never seen it for sale anywhere!

Looks like some other folks found it! Awesome!!!!!! I want to hang one at Brave New Books!

Even pharmacists used to turn to mother nature for…

Can anyone recommend other resources (books, documentary etc.) to view old documents of when plants were mainsteam medicine ? I’ve seen some old doctor’s briefcases at various museums and they are loaded with plant remedies.

Look for the Ministry of Healing (The Book of Health and Happiness) by: Ellen G. White. It has all you need to know about what we need to survive and live a healthy the way God intended for us to live. I hope this helps… It’s a Seventh Day Advent message.

https://archive.org/details/medicalheritagelibrary is a good place to start, but there are SOOOO many.
I also recommend http://www.henriettes-herb.com/eclectic/index.html

Check out the references on essentihal oils!
Those will keep you busy and make you wise!

Please provide a date when this article was published….Thanks!

The use of medicinal plants is by no means pseudo science but is not necessarily good medicine. There are serious problems with dosage. The medicinal ingredient in the plant can vary wildly with type of soil, growing conditions and time of year. Standardized plant extracts are one way around this, but do require scientific equipment like mass spectrometers to make sure the dose is correct. Medicinal plants also often contain more than one bioactive agent. Cannabis, for example, has over 60. The two best studied are THC and CBD. In a recent FDA stage III clinical trial, CBD was shown… Read more »

We sell this map in multiple sizes and on multiple paper types here at https://www.vintprint.com/products/drm48859. We’re honored to have one of our best-selling products featured in your blog. Please use this discount code to save 15% on this item in any size or paper type. Just enter the code “HomesteadGuru” at checkout. Thanks!

Hey do you have affiliate links we could use?

The map can be purchased in many different sizes and formats on Redbubble.com – https://www.redbubble.com/people/42designs/works/15526272

A Good Education is NOT FOUND in Schools » HG