Milliennials–the generation born between 1981-2004–are creating confusion and fear in seasoned financial analysts, who are baffled by their buying habits.

In fact, there’s an entire list of industries and products being murdered by millennials, because they can’t seem to sell to the younger crowd. Fabric softener, department stores, and golf courses are just a few of the consumer joys in financial peril–but WHY?

Why are adults under 35 not buying as many houses, diamonds, or meals at “casual dining” chain restaurants? 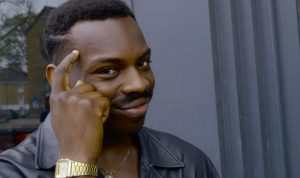 The buying habits of a generation who’s come of age alongside the internet can be hard to predict–but some analysts think they know what’s happening:

Millennials must be psychologically scarred from the recession, so they’re not spending like prior generations!

“I think we have got a very significant psychological scar from this great recession,” financial analyst Kimberly Greenberger is quoted in Business Insider.

She continues; “One in every five households at the time were severely negatively impacted by that event. And, if you think about the children in that house and how the length and depth of that recession really impacted people, I think you have an entire generation with permanently changed spending habits.”

Ah…okay, Ms. Analyst. If I had to bet, I’d say she’s NOT a millennial.

The 2008 recession may have been rough–but for many millennials, they went right from that scenario into crippling student loan debt, to pay for degrees that over-promised on job availability and earnings potential down the road.

The average salary of a millennial is a full 20% lower than the average salary a baby boomer earned “when he was our age”. They’re also likely to be deeper in debt and pay more for housing than their parents or grandparents ever did.

Meanwhile, the cost of a university degree (i.e. the purported best path to a well-paying career) continues to skyrocket, and rents in most major cities are at staggering rates.

Instead of trying to figure out how to get millennials to spend their often meager paychecks on consumer goods and casual dining, maybe the financial analysts should start looking at the larger picture:

Millennials may be the first large economic cohort to be squeezed so tightly that they’re starting to opt out of the money game that their parents and grandparents played.

Young Americans are returning to sustainable, long-term priorities–before the corporate reign of Applebee’s and Hooters, Macy’s and Sears took over.

Sure, people love to hate on millennials and say that they’re ruining American culture. 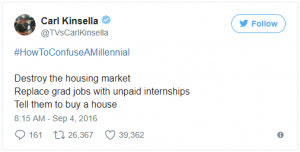 Millennials really ought to invest in (so-called) health insurance, and simply do without a smartphone until we’re wealthier, according to this US senator. After all, says Fox News pundit Bill O’Reilley, how can millenials still be poor when they own things like smartphones, coffee makers, and air conditioners?

We’re even to blame for not buying homes, and it’s clearly because we spend so much on avocado toast and craft beers (according to one myopic millionaire).

However, millennials are a generation with different priorities. Raised in the age of information, milliennials are the best educated generation in history. They have lower rates of teen pregnancy than previous generations, and they’re putting off marriage until later in life, too.

Millennials care about how others are treated, as well as their own health and well-being. They want to know what they’re eating, where and how it’s grown and produced. They also cook at home more often–and they couldn’t care less about the new menu items at Twin Peaks. 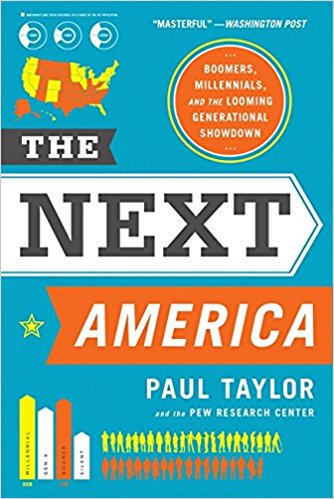 Millennials are not willing to take on a 3rd or 4th job to make sure they can eat at sub-par restaurants and collect disposable, designer junk.

Clever marketing isn’t the answer to Wall Street’s so-called “problem”. Companies who don’t want to go belly-up in the years ahead will face the increasing challenge of meeting legitimate human needs, instead of just their profit goals.

Thanks to millennials, the economic landscape is shifting–and it looks like it’ll be permanent.

Hmm it appears like your website ate my first comment (it was super long) so I
guess I’ll just sum it up what I submitted and say,
I’m thoroughly enjoying your blog. I too am an aspiring blog blogger but I’m still new to everything.

Do you have any helpful hints for first-time blog writers?
I’d genuinely appreciate it.

I’m a baby boomer, born in 1959 and am fully in agreement with you. Despite how some would wish to “pigeon hole” people, we’re still all in this together. I didn’t buy into the prevailing “wisdom” that was fed to me as I grew up and as an adult. And don’t think I’m the only one in my age group who feels this way.

Perhaps “common sense” has prevailed in this “millennial” generation. Enough to save us old folks from ourselves…

Thanks for a GREAT article! 🙂

Love this! Literally just had a debate with my mom on why building our home slowly and debt free ourselves vs buying it now. Her argument= your prolongging enjoying it. My argument= I will never enjoy it if I work twice as much to pay for it

Glad people see we aren’t all lazy and self obsessed 🙂

Wow I love how you look at that! Yes, if we have to work around the clock we don’t get to experience our homes!