Monarch Migration Watch: Last month we shared about how Monarch Butterflies have been migrating south in record numbers but in reality that was just an estimate based on satellite images while they travel. The true test of whether or not the Monarchs were arriving in record numbers depends on how much end up at the resting place in the state of Michoacan, Mexico. 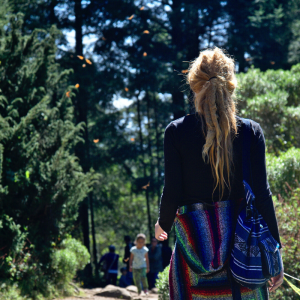 I’ve lived in Mexico for four years but never made it to the butterflies due to work constraints. This year I made a point to go to what’s known as the biggest butterfly sanctuary in Mexico, El Rosario Sanctuary in Ocampo, Michoacan. The sanctuary is actually about 12 kilometers outside of the main city of Ocampo in the mountains that are thick with the signature fur trees they flock there for the warm weather so they can start yet another generation.

More from the Homestead Guru: Killing the Rainforest, Are the U.S. and China in this together?(Opens in a new browser tab) 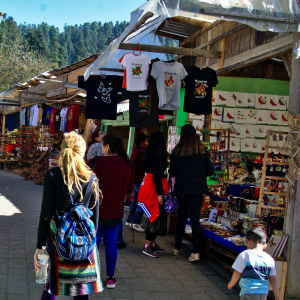 Every year they show up in the pine forests of Michoacan in December. When I arrived you could see the excitement in them as they fluttered around, soaring up and down the mountain with an excitement that all expats feel when they arrive in Mexico. There was a walk up to the entrance of the Sanctuary filled with a market of people selling food as well as Monarch themed keepsakes. 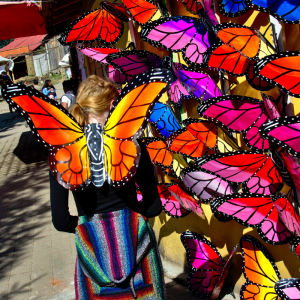 When you get to a certain point, you buy a ticket for 50 pesos and then begins the real hike up to the top of the mountain along guided paths with plenty of rest spots for those who aren’t so physically active. It’s about a 40 minute hike up to the top where the real magic is. It was something special to see people of all ages from being toddlers to the elderly, slowly making the climb to see the butterflies.

When hiking you’re surrounded by flocks of butterflies that are moving so fast it’s hard to get images of them. I know, because I tried. Eventually the ground levels out at the top and there were little streams where bunches of butterflies could be seen drinking. I thought this was the best part, but I was wrong. Where they were drinking was in a little field, but where the magic was happened to be a bit further in the forest. 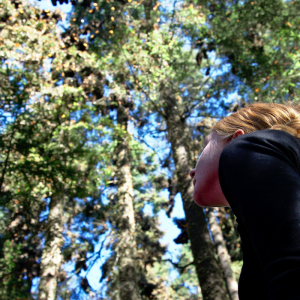 Employees of the sanctuary were standing guard on this road that went a bit into the forest where there were old pine trees. The road was blocked off at a point and people were told to stay quiet as to not scare the butterflies. There were hushed whispers of “WOW” and that was it. 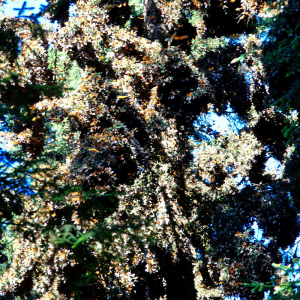 A little in the distance you could see the butterflies, probably in the millions coating the pine trees. They were resting and there were way more than I even expected. The people who go there annually talked of the huge amounts of butterflies compared to previous years and while we didn’t have any sort of count, it was obvious that the hype was right, this was a record breaking migration. 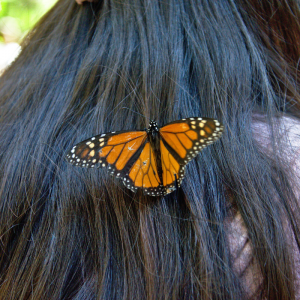 We stayed taking photos for about 20 minutes. It was absolutely amazing to see the huge flocks of butterflies, painting the tree orange with their wings and intense cover. The uphill hike was worth it and I consider this to be a life changing experience, one of my favorite adventures of 2019. If there’s one thing I know, it’s that I’ll be visiting this sanctuary annually to see this marvel. 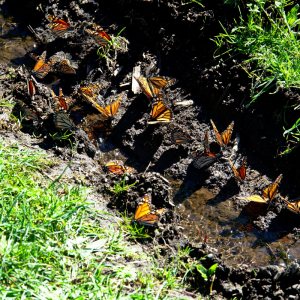 On the way down we ran a bit on the path, I couldn’t help but feel like a butterfly as well as we soared to the bottom. Running was magical but not advised, as even I fell at a point, but I don’t regret the memory of soaring through the pine forest surrounded by the fluttering orange beauties. 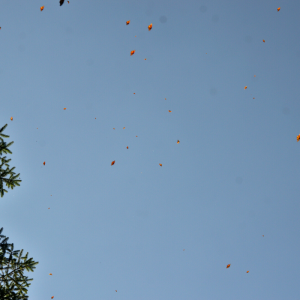 In February, they will fly again and it seems like I will go again with friends to see them off, as they fly north to the Northern United States and Canada.

If you ever have a chance to go to Mexico during December, visiting the butterflies comes highly recommended. Not only is it a lot of fun to witness the natural marvel, it’s kind of awesome to see how the locals capitalize by making and selling their butterfly themed crafts.

More from the Homestead Guru: Ireland Promises to Plant Half Billion Trees by 2040(Opens in a new browser tab)

I would love to visit them

What a great article. I really want to go see this, and was pretty sure my health would prevent it. Your article makes it sound like it might be doable.
The trees are fir though, not fur

What a great article about the Monarchs.
I really want to go see this, and was pretty sure my health would prevent it. Your article makes it sound like it might be doable.
The trees are fir though, not fur

Thank you for sharing your visit as well as the the exciting news about the large numbers of monarchs this year. With middle school students, I raise, tag, and release monarchs in Michigan every fall, so we’re hopefull some of our butterflies made it. In your piece you wrote, “For the next few months the butterflies will reproduce, die and their offspring will grow. In February, they will fly again…” My understand is that the monarchs are not sexually active during their time in Mexico, but that it’s not until the head north toward Texas that they become sexually mature… Read more »

I’m not sure this is accurate. I live in Michigan, United States, and I plant milkweed plants here so that Monarchs can procreate (we are told that they need these plants to reproduce in summer and that agriculture here has reduced milkweed plants so much that their population has declined by 90% over the past two decades). Are you sure they procreate in Mexico? Give me sources, not just some blind statement. https://www.edf.org/what-you-can-do-help-monarchs?utm_source=google&utm_campaign=edf_none_upd_dmt&utm_medium=cpc&utm_id=1565875274&gclid=CjwKCAiA9JbwBRAAEiwAnWa4Q3zQPE-4RkZdSZFFs9RXX-wYzGeKjcYbKzKXbVEwzBIziIP-OPs9hBoCZIkQAvD_BwE

According to what I heard from Dr. Lincoln Brower, back when I was an entomology grad student in 1989, monarchs spend the winter here, but they don’t mate and lay eggs until after they return to the USA in late winter/very early spring.

This was such an exciting account to read, giving hope that the monarch populations are recovering. Maybe the wide-spread movement to plant milkweed across North America is helping. (I’m not sure the over-wintering monarchs lay eggs while in Mexico though. I think these same adults are the ones that start migrating north in the spring.)

Hi! Love hearing good news about the butterflies! We were actually there 2 weeks ago but stayed at JM Butterfly B&B and hiked up the Cerro Pelon mountain to see them. Much more secluded and a lot less people! Two things about your article that I found incorrect though. The butterflies do not reproduce once they leave their homes in the U.S. and they don’t lay eggs in Mexico. Also the ones that arrive in Mexico are the same ones that leave in March to start their journey back to the states! Pretty amazing. Just an FYI! Love your pictures… Read more »

we lead tours to see three of the Monarch Butterfly sanctuaries in Mexico each winter with local guides we also tour some of the villages and attractions in the area. This is a Fair Trade tour. We support the local communities as we travel on a budget.

The Monarchs do not breed until after winter, on their way back north. They only lay their eggs on milkweed plants, which is the only things the caterpillars feed upon. The spraying of herbicides has drastically reduced the number of milkweed plants available, but there are Monarch preservation groups busily educating people and planting milkweed.

Thank you for sharing your experience and the lovely pictures. We were there several years ago and there were only butterflies in 4 or 5 trees, so this is indeed encouraging!

Monarch butterflies ONLY lay eggs on plants in the milkweed family, not on trees, especially not on fir trees in the Mexican forests. These fir trees however are at an elevation and climate that are perfect for the millions of North American monarchs to overwinter from early November to mid-March. They will mate during warm days in this period, but the females will WAIT to lay eggs until they fly north to the southern United States, from Texas to Louisiana, north to southern Ohio and mid-Iowa. When these young develop into adults, they continue to fly north, northeast & a… Read more »

They don’t reproduce in Mexico. They just overwinter and the same Monarchs that arrived in the autumn leave the next year to head north. They start laying eggs on milkweed on the way north (northern Mexico and Texas), and then the butterflies that spent their winter months in Mexico die. The life cycle is complete. You can follow the migration at: https://journeynorth.org/monarchs

Hi, my information on them reproducing was coming from those who run the sanctuary as well as the presence of a surprising amount of milkweed. While I’m sure most of the reproduction happens elsewhere, there was definately some going on there too, also lots of dying old Monarchs.

I have another question. I heard something once…someone said that there are also non-migrating Monarchs in certain parts of Mexico, with those staying in Mexico year-round. I assume that might be about a location or more than one with a mild climate year round. Have anyone heard that?